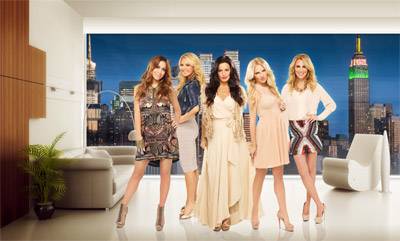 Style reaches for big city dreams with the chic pals of 'City Girl Diaries," a new docu-series premiering Monday, August 26 at 9:30pm AEST. These five, 30-something ladies are talented, beautiful and the best of friends. The series will take viewers on a high-class journey through their fast-paced New York City lives, from epic girl talk sessions to their dating mishaps, tumultuous love lives and demanding careers. Despite their drastically different personalities and busy professions, this group of women have remained inseparable and will stick together through thick and thin. Together, they will navigate old friends, new beginnings and awkward situations.

Leigh Rossini
Leigh is an outspoken publicist who runs the hippest salon in Manhattan, The Louis Licari Group. Having just given birth to a new baby, Leigh now finds herself at a crossroads – learning how to balance motherhood, her relationship and her career.  Though Leigh is known to push a few buttons, she is the glue that holds the group together.

Marianne Garvey
Marianne began her friendship with Leigh after a random encounter while bicycling across the Brooklyn Bridge. Marianne's the Queen Bee of New York gossip. Prior to her role as a New York Daily News columnist, she was an editor at In Touch magazine and Page Six. Along with her thriving career in journalism, Marianne is pursuing her lifelong dream of being a stand-up comedian.

Leila Shams
Leila and Leigh grew up together, and twenty years later, they are still the best of friends. Leila is a fashion designer whose unique pieces have been worn by Vanessa Hudgens, Nicki Minaj, Fergie and Kim Kardashian, to name a few, and have been featured in Elle, Marie Claire and numerous fashion blogs. Currently, she is the design director of Buffalo David Bitton, but hopes to one day have the means to work on her namesake line full time.

Kelly Brady
Kelly is a publicity maven looking to take her PR agency, Brandsway Creative, to the next level. Her clients include supermodels Jessica White and Julie Henderson as well as New York's hottest restaurants The Dalloway, The Stand Restaurant and Georgica in the Hamptons. Additionally, her agency plans charity events such as The Doe Fund, Jacobs Cure and The National Urban Technology Center. Her tight bond with Marianne formed years ago when she pitched stories to Marianne at Page Six. Since then, their relationship and Kelly's career have come a long way.

Raina Seitel
Raina is an Emmy-award winning journalist and serves as an entertainment and lifestyle correspondent for a number of high profile media outlets in the US. Raina became friends with Leigh after years of getting her hair done at Louis Licari Salon. Newly divorced and now a single mother, Raina must juggle parenthood, a busy career and the single-life in New York City.

Don't miss a minute of new series 'City Girl Diaries" when it premieres on Monday, August 26 at 9:30pm AEST only on Style.
(Style is available on Foxtel on Channel 122)