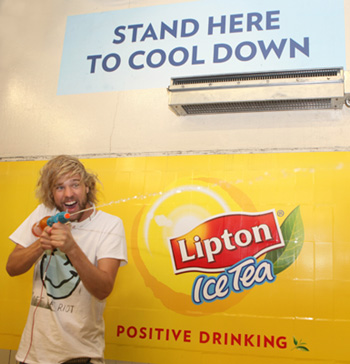 IT'S OFFICIAL: WHEN IT'S HOT WE LOSE OUR COOL

The iconic Aussie summer: It's the reason we're always on the beach, are experts at barbecues and why more Brits move here every year. But, despite our love of the sun, the warmer weather is having a marked effect on our emotional and mental wellbeing and maybe even our marital status.

According to the newly released Lipton Ice Tea Swelter Meter, a nationwide study of more than 1,000 Australians, when the heat rises to 28.9 degrees our bodies start to react making us feel hot, sweaty and thirsty. Add another four degrees and the heat starts to get intolerable making us feel irritable, hot and bothered. So irritable, in fact, that one in 20 people say it could cause them to dump their partner.

Our collective reaction to heat is even more important as early predictions of the summer weather are signaling heat waves and hotter temperatures for the north, south, and particularly southeast of the country.

When it comes to our top summer annoyances, Australians are mostly concerned about being too hot to get a good night's sleep (74 per cent), closely followed by being bitten by mosquitoes and flies (68 per cent), dehydrated and thirsty (40 per cent) and hot and sweaty waiting for public transport (35 per cent).When temperatures rise, so do our tempers, with 1 in 3 Aussies admitting they're more likely to snap back or lose their temper over something trivial. Surprisingly, its women who are more likely to lose their cool than men with more than half of the fairer sex claiming they would lash out.

One of Australia's most loved video jockeys and Lipton Ice Tea's Swelter Meter ambassador, Danny Clayton, believes Australians can still enjoy the summer months without the physical and emotional turmoil if we just stop taking the extreme heat too seriously.

"We're a nation who claims to love the sun, sand and surf, and yet rising temperatures seems top of the list for making us an irritable bunch. But luckily, beating the heat is easy - you just need to be creative," said Danny Clayton who has created a series of top tips to help Aussies beat the meltdown.

"Nothing could be easier than pulling out a miniature blow-up pool, filling it up with ice and throwing in your favourite drinks. When the ice melts, you know it's time to get in your speedos and jump in!"

Two of the groups most likely to lose their cool this summer are busy city professionals and commuters. And now help may be at hand for their long commute to work as Lipton Ice Tea unveils new misting zones across key train stations today.

We also know from the research that the majority of Aussies crave a light refreshing drink to keep cool during the height of summer (48%) - even more-so than a fizzy soft drink (23%).

In addition to the misting zones, the Lipton Ice Tea sampling team will be handing out free bottles to cool commuters down".

For further information about Lipton Ice Tea, or any Lipton products, please visit the Lipton website, viewable at: www.liptonicetea.com.au.

Enter now for your chance to win one of 3 x Lipton Ice Tea Cases.

ABOUT LIPTON ICE TEA:
Lipton Ice Tea is one of the world?s leading iced tea brands and is sold in over 56 countries worldwide. It is a deliciously refreshing cool drink. Lipton Ice Tea is made from real tea leaves and contains no preservatives, no artificial colourants, and less sugar than most regular soft drinks.