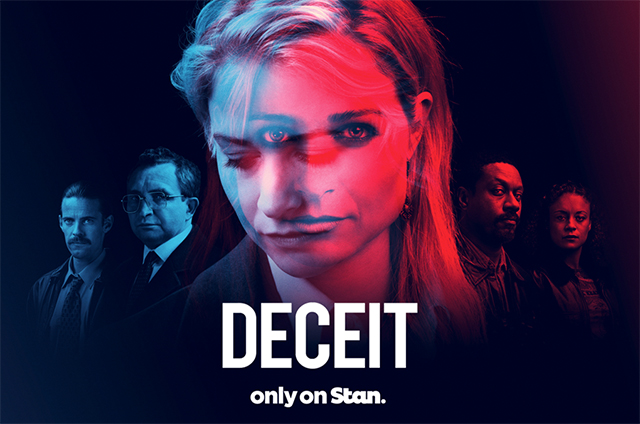 Starring Niamh Algar (The Virtues, Raised by Wolves, Calm with Horses), the gripping four-part drama examines the controversial honeytrap at the heart of the high-pressure investigation into the devastating murder of Rachel Nickell in 1992.

Examining the complicated and toxic sexual politics of the early '90s and the police's obsession with the wrong man, Deceit enters a dysfunctional world, where a female undercover officer, codename 'Lizzie James', is asked to become sexual bait for a suspected killer.

Five months on from the crime, The Met Police are still no closer to capturing the man they're convinced is responsible. First identified through a BBC Crimewatch appeal, the evidence points to Colin Stagg (Sion Daniel Young – Keeping Faith, The Left Behind). The media feed a national obsession, covering every detail of the case and demanding justice. The police are determined to catch the man who, in their eyes, is guilty before he kills again. In desperation, the relatively young Detective Inspector leading the case, Keith Pedder (Harry Treadaway – The Crown, Star Trek: Picard), engages the nation's most famous criminal proﬁler, Paul Britton (Eddie Marsan – Ray Donovan, Vice), to help devise a bold undercover operation which will see an attractive, young female officer start a relationship with Colin Stagg.

Growing up under Thatcher's reign, with second-wave feminism, 'Lizzie James' (Niamh Algar) is determined to rise through the ranks. But the early '90s has brought with it an inevitable backlash in the shape of 'Lad Culture', obliterating any feminist gains and putting women ﬁrmly back in their place, something felt by both 'Lizzie' and her friend and colleague Lucy (Rochenda Sandall – Line of Duty, Criminal: UK).

Hugely ambitious, 'Lizzie' has found a way to stand out by becoming one of very few female undercover officers deployed in covert operations, in a team which includes her sometime confidant Baz (Nathaniel Martello-White – I Hate Suzie, Collateral, Small Axe: Mangrove). But then she's offered a central role in the biggest murder enquiry the country has ever seen.

Produced by Story Films, written by Emilia di Girolamo (The Tunnel) and with access to previously unheard audio, video and written materials, Deceit includes scenes of verbatim dialogue as part of a ﬁctionalised retelling of events, taking audiences behind the scenes of one of the UK's most ﬂawed and controversial police investigations.