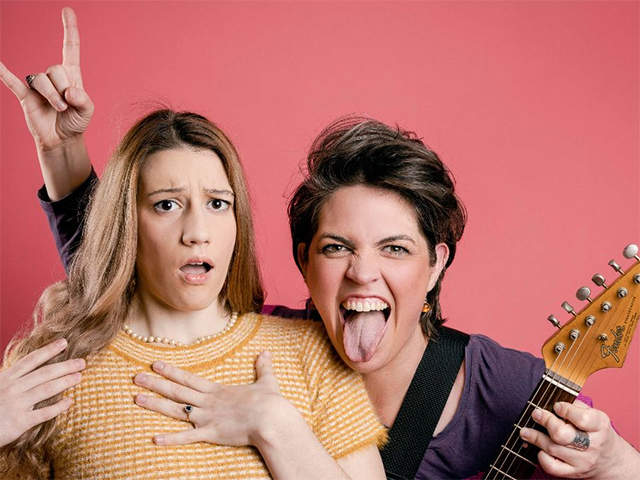 Newly launched musical theatre company Theatrical presents the Victorian premiere of Freaky Friday, based on the beloved 1972 novel by Mary Rodgers and the hit Disney films, including the 2003 film starring Lindsay Lohan and Jamie Lee Curtis.

The Chapel Off Chapel production features music and lyrics by Tom Kitt and Brian Yorkey, the Pulitzer Prize-winning composers of If/THEN and Next to Normal.

Freaky Friday is a modern spin on the '70s novel, where a mother and daughter swap bodies and experience each other's lives firsthand, for a day. Tickets are on sale now via theatrical.com.au.

Director Bronte Regos Thiele is staging the production in the present day, splitting the stage between an ordered household, a homely suburban Chicago and the chaos of adolescent relationships at school.

"We explore the microcosm of high school and the social dynamics that go with it, such as friendships, enemies, and crushes. For me, the true heart of the story is in mum and daughter learning to open up to each other, and develop an understanding for the other's perspective that is often rare for a teen and her mother," says Bronte.

Freaky Friday is a raucously fun comedy about swapping lives, but also deftly explores themes of loss, grief and family dynamics, with the death of the father explored through the split perspective of the lead characters Ellie and Katherine.

Lyla Digrazia (19) who plays the daughter Ellie, says the musical presents touching and poignant themes of connection across generations.

"How my character interacts with her mother, and then of course actually becomes the mother for a moment, has given me a lot to consider about how two people may be expected to process grief. There are really different expectations for different generations. They both lost the same person, but the expression is so different for each," says Lyla.

"Freaky Friday lets us think about that, and build empathy."

With Choreography by accomplished Broadway dancer and choreographer Bridie Clark (Jazz on the Westside, Colors of Columbia), Theatrical's Freaky Friday will delight Melbourne audiences with some TikTok inspired dance numbers, colourful sets and costumes, catchy tunes and an energetic cast of some of Melbourne's best emerging performers.
Theatrical is a not for profit and registered charity from Executive Producer Andrew Gyopar (If/THEN, Little Women), an independent musical theatre company with a mission to provide opportunities for disadvantaged and underrepresented groups who might not otherwise have access to participate in musical theatre.

Andrew started his career as a presenter and producer on Triple R, going on to produce radio and TV as well as a slew of major musicals. Andrew led a range of community arts and media organisations (Southern FM, Community Broadcasting Association of Victoria) before launching Theatrical.

The company has launched with a dedicated Theatrical Community Shed (Victorian Men's Shed Association member), welcoming people of all gender identities, ability and ages. The program seeks to offer enriching training opportunities for those that may have not yet have had the privilege of access to theatre skills training.

Theatrical Community Shed is a place for non-performers to experience the joy of being part of a musical theatre production. Theatrical's Community Engagement Manager Megan D'Souza says it allows people to use their skills, or learn new skills, to create part of the show and then get to see their work up on stage, meeting a whole lot of new people during the process.

"We have carpenters, fashion designers, interior designers, teachers and administrators who would never have considered themselves as theatre people before they got involved with Theatrical Community Shed. Not everyone can afford singing and dancing lessons and not everyone wants to be on stage in the spotlight. Theatrical Community Shed enables us to have a much more diverse community involved in creating musical theatre," says Megan D'Souza.

"We are always expanding what true inclusion and representation can mean. This is a work in progress," says Andrew Gyopar.

Theatrical will run workshops this year for those who may not have had access to musical theatre, aimed at helping underrepresented groups of people build their skills and confidence in many disciplines of theatre production.
theatrical.com.au

Where does your love of the stage come from?

My love of the stage came from when I started dancing at 18 months and I think going on stage for the first time and seeing my family in the audience made it very memorable to me and always made me think that being on a stage is where you could show your love for what you do.
What was your first musical and what role did you play?
The first musical I ever did was Xanadu Jr when I was 8 years old and I played a featured Ensemble
What has been your favourite musical to date?
Favourite musical has to be Legally Blonde Jr as Elle Woods! My all time dream role!
Can you tell us about your role in Freaky Friday, and what you love about this show?
I play the role of Ellie Blake in freaky Friday and what I love about this show is that it explores themes that are actually so relevant like wanting to switch bodies with someone for a day and get away from your own life for at least 24 hours and I feel that everyone can relate to that in some way and sometime in their life.
Can you share your socials so we can keep track of what's new with you?