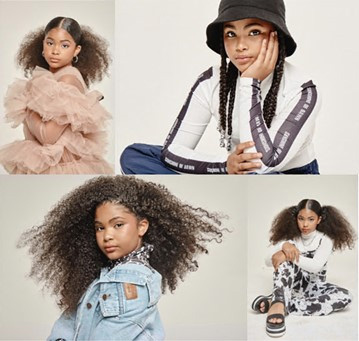 At an astonishing 10 years old, Gen Z's newest rising star Jaidyn Triplett recently starred on PARAMOUNT+'s reboot of the iconic Nickelodeon series "iCarly" (show has just been picked up for a season 2!!). Joining returning cast including Miranda Cosgrove, Jerry Trainor, and Nathan Kress, Jaidyn is poised to replace 'Carly' as the new it girl and viral sensation. Jaidyn is also a budding YouTube star herself starring alongside her hilarious family including her actor-father Joshua Triplett on their YouTube channel The Triplett Family Network.

Bringing a fresh face to one of the most successful adolescent sitcoms of all time, Jaidyn stars as 'Millicent' the snarky, social-media-savvy rival to Carly, challenging her outdated methods when it comes to running her web show. As the only child lead of the series, 'Millicent' shakes up the iCarly cast in this 13-episode season that picks up nearly 10 years after the original show ended, and finds Carly, the original star, and her friends navigating work, love, and family in their 20s.

The Ohio-born prodigy moved to Los Angeles with her family in 2014 to further her acting career. Jaidyn started memorizing and reciting her father Joshua Triplett's audition scripts at the tender age of 3 years old. Jaidyn and her family are natural-born entertainers. When they're not on set, The Triplett Family enjoys filming videos for their YouTube channel where you can find Jaidyn cooking, baking and singing with her family.