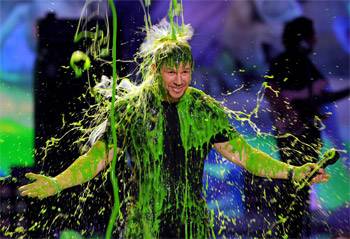 Our very own Aussie, Cody Simpson kicked off the star-studded celebration with a pop performance featuring celeb cameos by Pharrell Williams and internet sensation Todrick Hall. In a special live vote during the show, kids spoke up and declared both Cody and Austin Mahone slime-worthy, with the pair enduring an epic sliming. -Unslimeable' host, Mark Wahlberg was challenged by worthy opponents Pharrell Williams, Kaley Cuoco, Nicola Peltz and Jack Reynor - all of whom ended up glorified in the green goo for their efforts.  In the end, even Optimus Prime couldn't save Wahlberg from the massive drenching delivered by none other than Kevin Hart and the host's own kids!

Top-selling recording artist, Aloe Blacc took the stage with a medley of his hit songs, 'Wake Me Up" and newest single 'The Man," while Brooklyn-based rock group, American Authors closed the night with a multi-coloured neon slime-filled performance of their #1 smash hit, 'Best Day of My Life."

Kids' TV hit-maker Dan Schneider received a special Lifetime Achievement Award presented to him by the stars of his mega-hit series ICarly, Drake and Josh, Victorious, Sam and Cat, Jenan and Kel and Zoey 101.

This year's KCAs featured a new set design – dual stages, a 360 degree mosh pit and a slime river. During the live broadcast, kids and families were encouraged to post a -selfie' using #KCASelfie via Instagram, Twitter and Facebook.

Favourite Voice from an Animated Movie
Miranda Cosgrove (Despicable Me 2)

Favourite Song
'Story of My Life" (One Direction)

Nickelodeon's 27th Annual Kids' Choice Awards was in more than 375 million households around the world and in more than 25 languages.

You can watch Nickelodeon via Foxtel on Channel 701 and Fetch TV on Channel 146.