Sooshi Mango Off The Boat Tour 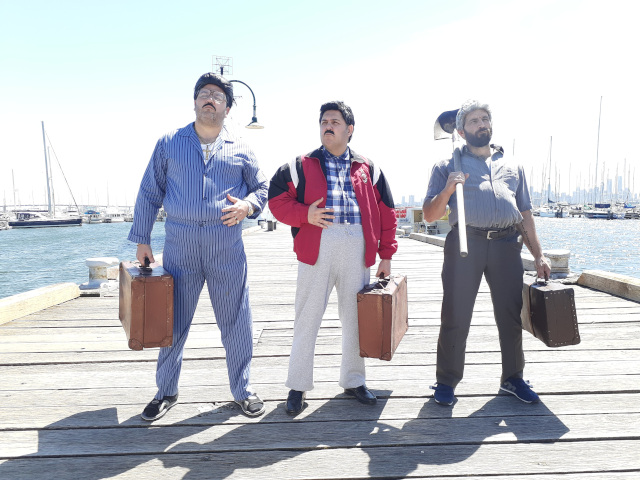 After a huge response to the first release of shows, much-loved comedy trio, Sooshi Mango, are adding a host of new regional and city dates to their OFF THE BOAT tour.

"We can't wait to hear the roaring laughs and smell the garlic breath in the air."

TEG Dainty is excited to announce that Australian comedy sensation, Sooshi Mango, have added nine new shows to their huge OFF THE BOAT.

The highly anticipated OFF THE BOAT tour will run from August–October and visit the following cities:

Tickets for the new shows are on sale at www.tegdainty.com. VIP Meet & Greet packages will be available.

Sooshi Mango are an Australian comedy troupe made up of brothers Joe and Carlo Salanitri and their close friend Andrew Manfre. The group's rise in Australian comedy has been nothing short of meteoric, with their viral online videos amassing over 120 million views and counting. Their characters"most notably ethnic mums and dads"have made their way from video skits in their parents' garages, to television screens across the country and stages around the globe.

The Melbourne boys, who have taken the internet and the world by storm, are set to bring the house down once more with their all-new two-hour show comprising of trademark skits and hilarious musical numbers.

As an entertainer I am so grateful to our fans for giving us the opportunity to perform at this level. We are honoured fly the banner for all immigrants that came to this great country in search of a better life. Can't wait to hear the roaring laughs and smell the garlic breath in the air. Andrew Manfre

The Melbourne boys, who have taken the internet and the world by storm, are set to bring the house down once more with their all-new two-hour show comprising of trademark skits and hilarious musical numbers.

We will be the first Australian comedy act to do more than one show at Melbourne's Rod Laver Arena. That makes me feel really proud and it's crazy to think 3 idiots like us who started shooting vids in a car have ended up here. It's truly humbling. Carlo Salanitri

Sooshi Mango made their theatre debut co-staring alongside Nick Giannopoulos in 2017 for two sold-out national tours: Wogs at Work (2018) and Star Wogs (2018).

The trio then went on to sell out shows in Canada with 'Ethnic Vacation, the Invasion of Canada', before returning to Australia to tour their outrageously funny 'Fifty Shades of Ethnic', which included 14 sold-out shows at the Forum Theatre and one sold-out show at the Palais Theatre in Melbourne, four sold-out shows at Sydney's Enmore Theatre, and many more performances around the country (33 in total)!

From the car to theatres, and now to Rod Laver Arena and Qudos Bank Arena! This is when someone usually wakes you up right!! Because stuff like this has only every happened in my dreams!! I am forever grateful for everyone that has helped this dream become a reality! Joe Salanitri

Sooshi Mango's humour transcends cultures and borders, and their content is wildly popular with people of all backgrounds. Proud Italian Australians, their comedy is inspired by their parents and the older generation and they are happy to be able to shine a light on their heritage.