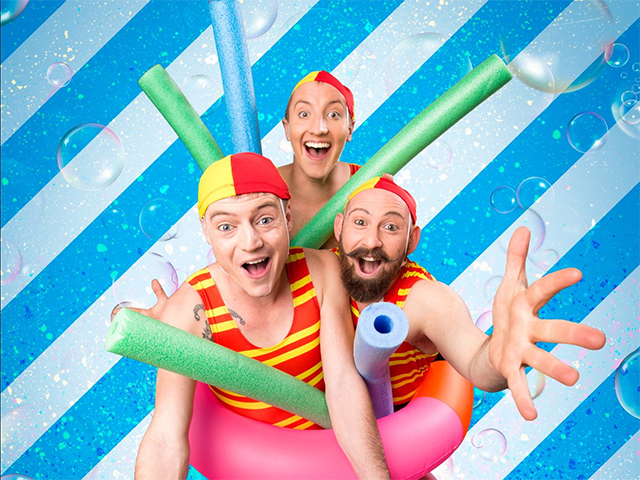 Direct from a sell-out Australian tour and following their award-winning season at the 2020 Adelaide Fringe Festival, Splash Test Dummies are back with a splash-tacular adventure of oceanic proportions. Pool noodles at the ready!

The winners of the Best Children's Award at the 2020 Adelaide Fringe Festival, these world-class circus artists bring their aquatic themed, family friendly frolic back to the stage. Dangerously funny with water pistols blazing, this extraordinarily talented trio will make your jaw drop with their unique mash-up of physical comedy, acrobatics, juggling and catch-your-breath stunts.

This family favourite will play The Vault at The Garden of Unearthly Delights between 18 February - 20 March 2022. Tickets are on sale now via Adelaide Fringe.

Imaginative play rules the day, as kids are invited to participate in the Splash Test Dummies "world of ridiculousness", an innovative, surprising and joyful experience, where no two shows are the same.

"We really aim to break the mould. Some kids come back to our show ten times, so it needs to be constantly evolving," says Jamie Bretman.

Jamie says that from the moment the audience enters and sees three lifeguards manning the beach, the adventure begins, with improvisation steering the direction the show takes - "Half of the magic that happens on stage is because we're improvisers. We're excited to see where the story goes ourselves, that's the fun of this show!"

The success that this Australian circus trio has seen – at home and abroad – is remarkable. They've been compared to the likes of Cirque du Soleil and Circus Oz, but they bring their own unique brand of magic to the stage, blurring the lines between the possible and impossible and inspiring audiences to do the same.

"If we can get even some of our audience members to run with the idea that anything is possible, we have achieved what we set out to do," says Jamie Bretman.

Directing the show is the acclaimed Claire Bartholomew. Claire's extensive directing and performance work has received no less than seven Green Room Award nominations, and one award in the Best Cabaret category. In addition to theatre-making, Claire is a renowned clown teacher. She's worked as a Clown Doctor at Children's Hospitals in Melbourne and around Australia for 13 years and is a Training Advisor for The Humour Foundation nationally.

"The show is Baywatch meets the Three Stooges" – Adelaide Advertiser