Season Pass to all of Untitled Group's events for 1 year To celebrate, Untitled Group are giving those who register the chance to win a bunch of prizes including a Season Pass to all of Untitled Group's events for 1 year (including Beyond the Valley, Pitch Music & Arts, Wildlands, Grapevine Gathering, Ability Fest, Untitled Day Parties & more) and an online meet and greet with the artist of your choice. The runners up will have the chance to win a double pass to Beyond The Valley 2020, a $150 voucher to Chin Chin takeaway, a $100 voucher for an alcohol delivery service or a case of Red Bull.

No stranger to a day party, Untitled Group have announced their virtual interpretation - pre-recorded from 3 unique, undisclosed Melbourne locations featuring panoramic views of the city skyline, a train carriage on a rooftop and an industrial warehouse location, the Virtual Day Party will be streamed via Untitled Group's Facebook page. Headed up by two time Aria nominated house producer & Aussie festival favourite Dom Dolla, he will be joined by homegrown talent Willaris. K, Torren Foot, Jordan Brando, London Topaz & Elizabeth Cambage. The stream will be powered by Red Bull, with support and safety messaging from Vanessa.

The Coronavirus epidemic is changing the world. In what feels like an instant, the entire music industry has been brought to a halt. "Music lovers are being deprived of experiences that are so important to them & ingrained in their way of life, which is why we have decided to keep the spirit of our day parties alive in a new virtual format," explains Untitled Group director Filippo Palermo. We've reached out to some of our audience's favourite artists who have kindly donated their time in the spirit of filling this void."

The Virtual Day party will stay true to all facets of the Untitled's renowned 'day party' events in their uniqueness & quality on all fronts from lineup, to production, to location. "I'm super excited to be a part of this showcase, we really wanted to do something that was as visually engaging as it was attractive to the ears. I hope it makes people's Saturday evening ISO-beers a little bit more enjoyable," explains Dom.

The Virtual Day Party will take place on Saturday 18th of April and can be streamed for free via Untitled Group's facebook page. Sign up here to go into the draw to win a season pass to all of Untitled Group's events for a year (including Beyond the Valley, Pitch Music & Arts, Grapevine Gathering, Untitled Day Parties, Ability Fest & more), an online meet and greet with the artist of your choice, a $150 voucher to Chin Chin, a $100 alcohol delivery voucher, a case of Red Bull & more.

Untitled Group has filmed the Virtual Day Party in accordance with the government advice and legislation in place at the time of filming. Untitled Group supports the #savethesummer campaign, urging festivalgoers and music fans to take all precautions to stop the spread of the virus in order to save lives and ensure that summer 2020 will see the resurgence of live music and entertainment. Stay home, stay safe and #SaveTheSummer".

Untitled Group would like to thank lighting, production and film operators Lightning Lighting, Enamoured Iris, Matthew Jens and Unknown Vision, for kindly contributing their time to make this concept come to life.

Having recently sold out his headline show at the Coburg Velodrome, Dom will be showcasing a teaser of his forthcoming national tour which has been rescheduled to October this year around the country.

Tastemaker and producer Willaris. K had his triple j supported break-out single "Alchemy" back in 2018 and has never looked back. His sophisticated techno has seen him earn fans in Pete Tong, sell-out shows in Australia and play at festivals including Coachella, Splendour in the Grass, Lollapalooza, Beyond the Valley, Wildlands, Forbidden Fruit and more. He's just released brand new EP 'LUSTRE'.

Perpetually ahead of the curve, house producer Torren Foot was raised on the working docks of Melbourne's inner west, and is now a fixture of Aussie club culture as one of the countries most in demand touring dj's - he recently gained international attention following the release of 'More Life' topping #1 Beatport overall, support from tastemakers Adam Beyer, Claptone, Mat.Joe, Wax Motif & Destructo to name a few and A-list radio support from triple j.

Festival highlight performances include Beyond The Valley and Falls Festival, Torren is emerging as one of the country's most well respected and high demand producer DJs.

Recognised by BBC Radio 1's Pete Tong & tastemakers globally, Jordan's abilities as a DJ and a producer raise no questions to why he is "a rising star in Australian dance music." Standout performances at revered festivals Beyond the Valley and Pitch Music & Arts, and being handpicked to share the stage with the likes of Patrick Topping to Jamie Jones, have all contributed to solidifying Brando's name as one Australia's most promising dance music exports.

Vaulting a solid basketball career, it's her passion for music that has taken to the centre of her court, reeling in a fashionable barrage of attention in the electronic scene. Gracing the console at For The Love, Groovin' The Moo Festival, Melbourne's iconic institution Revolver, through to events for global brands like Adidas during Coachella week, Liz Cambage's sound has travelled. Not only has she graced stages across the globe, but has too supported some of the world's most renowned musical icons from Mary J Blige to Steve Aoki, sitting firmly amongst some of the highly influential pioneers.

With a style reminiscent of top-tier electronic artists such as RÜFÜS DU SOL and Hayden James, London Topaz's sound has captured the attention of dance music enthusiasts globally. With enthralling performances at his sold-out headline show, Beyond the Valley festival & For The Love, it's no question why London Topaz has cemented himself as one of Australia's top emerging talents. 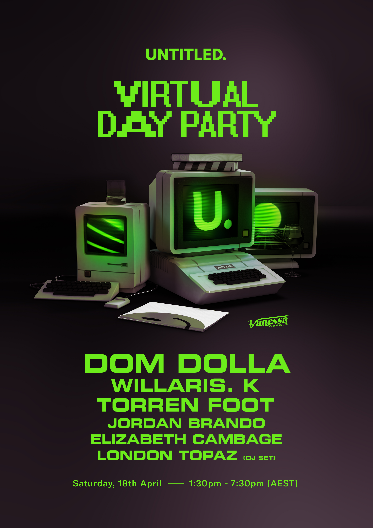