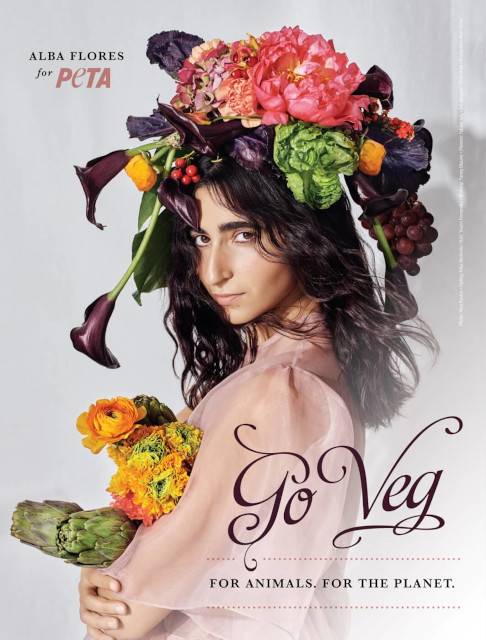 Wearing a dramatic headdress made entirely of fresh fruits, veggies, and flowers, star of Netflix hit Money Heist Alba Flores poses in a brand-new campaign for PETA Latino that encourages everyone to save animals and the planet by going veg – an action that also helps prevent the spread of deadly animal-borne diseases.

The actor, who also stars in gritty prison drama Vis a Vis, decided to stop eating meat after seeing how much food was wasted after her family's Nochebuena celebration. "I started to think about where that food came from and how much food will be thrown away … and [wondered] how necessary the deaths of those animals really were," she told PETA Latino. "I started to look into it, and I realised that this wasn't the only big problem. The entire animal agriculture industry poses a very serious problem for the planet."

PETA stresses that the reasons to go vegan have never been clearer or more pressing. COVID-19 is believed to have originated in a "wet market" where live and dead animals were sold for human consumption. Filthy meat markets, factory farms, and abattoirs crammed full of sick and stressed animals are breeding grounds for zoonotic diseases. Previous influenza viruses originated in chickens and pigs.

Every person who goes vegan reduces their carbon footprint, as the meat industry is a leading producer of the greenhouse gases that contribute to climate change; spares nearly 200 animals a year daily suffering and a terrifying death; and reduces their own risk of developing heart disease, diabetes, and cancer.

"And now, the truth is, I feel so much better eating vegetables and pulses and grains," Flores concludes. "I think that your food doesn't have to be the cause of suffering and exploitation of animals."

Flores joins a growing list of celebrities – including Alicia Silverstone and her son Bear, DJ Tigerlily, Joaquin Phoenix, and Arianwen Parkes-Lockwood– who have teamed up with PETA and its affiliates to promote healthy, humane meat-free meals.

PETA– whose motto reads, in part, that "animals are not ours to eat– opposes speciesism, which is a human-supremacist worldview. For more information, please visit PETA.org.au.