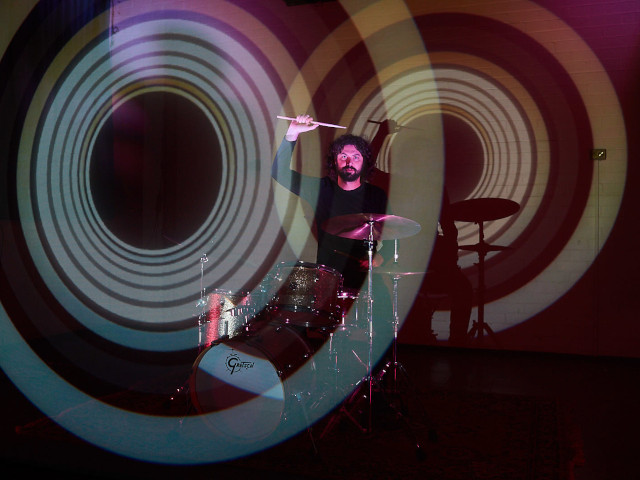 Australian based drummer, composer, and instrument designer Alon Ilsar presents his acclaimed and award winning show Trigger Happy 'Visualised'"a one hour multisensory percussive experience unlike any other. As a co-designer and SensiLab researcher of the innovative gestural instrument, the AirSticks, Alon has dedicated his extensive PhD research to redefining what an instrument is and can be, whilst simultaneously making music creation more accessible to the broader community. Winner of the 2020 Melbourne Fringe SA Tour Ready Award, Dr. Ilsar is ready to showcase the next-generation musical journey of this research, commanding a holographic world with his custom-built AirSticks in the wholly unique two-man show Trigger Happy 'Visualised'.


Taking place at The Toff in Town on Sunday 3 July, Trigger Happy 'Visualised' is a vivid ride through an audio-visual wonderland unlike anything you've heard or seen. Alon brings music from Comatone & Foley's Trigger Happy releases to life, utilising his kinetic custom built audio-visual AirSticks. A cutting-edge fusion of technology, music, and visual arts, Melbourne audiences have an opportunity to experience the seasoned screen artist and percussionist perform his 60-minute show, working together with accomplished visual artist and programmer Matt Hughes, who digitally visualises the music live. Alon seemingly pulls shapes, colours, and textures out of thin air with hypnotic, pulsing beats, using his body as an invisible drum kit.

"The performance will not only demonstrate the technology we've been developing, but it will also give audiences the opportunity to experience the possibilities of this technology first-hand, and challenge their notion of what can be achieved between movement and sound in live performances. In the show I purposefully keep the audience guessing as to what is real and improvised, and what is predetermined and composed." – Alon Ilsar

With a PhD in instrument design through the University of Technology Sydney, Alon Ilsar has played the AirSticks at Sydney's Vivid Festival, on Triple J's Like a Version and at NYC's MET Museum, with projects such as Trigger Happy 'Visualised', The Hour, The Sticks, Tuka (from Thundamentals), Sandy Evans' 'Ahimsa' and 'Rockpool,' Ellen Kirkwood's '[A]part', Kirin J Callinan, Kind of Silence (UK), Cephalon (US) and Silent Spring. He has played the drums in Belvoir Theatre's 'Keating! the Musical,' Sydney Theatre Company's 'Mojo,' Meow Meow with the London Philharmonic, Bergen Philharmonic, Sydney, Melbourne and Western Australia Symphony Orchestras, Stephanie Lake's 'Manifesto,' Alan Cumming, Jake Shears and Eddie Perfect.

Do not miss your chance to catch Alon Ilsar live when he brings his award-winning AirSticks to The Toff stage in Trigger Happy 'Visualised' this winter. Tickets are on sale now, run don't walk.