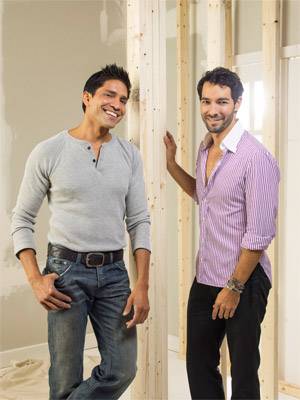 Construction Set to Begin Wednesday, March 6 at 9:30pm only on Style.

On each new episode of 'Built", the five-man crew will tackle a home makeover project by helping their clients with remodelling challenges. A prominent interior designer with -Hott and Handy' lends her insight and expertise to ensure that the creative expectations are being met. With their different personalities and skill sets, the team sometimes struggles to find common ground in their work; however, their dizzying good looks bind them together and ensure a handsome ending.

Shane Duffy:
As co-owner of -Hott and Handy', Shane is the point person for the company, bringing in the clients and ensuring that they are happy with the job from start to finish. Having recruited his handy, model friends for his business, Shane is the only one who can keep them all in line, especially when any problems arise during a redesign. The idea for this business venture came to Shane a few years ago when he was doing general handyman work in between modelling gigs and a client called him 'hot and handy." Now, he has offices in New York City, Los Angeles and Miami. As a model, he has become one of the most sought-after face and body parts models and has been featured in national and international campaigns for Johnny Walker, Banana Republic and Marlboro among others.

Sandy Dias:
The foreman of the group, Sandy runs the construction team by the book and manages the execution of all projects. He is proficient in the use of hand and power tools and his experience includes framing, sheet rock, doors, plumbing, trim work and tile, to name a few. With a degree in Aeronautical Technology, Sandy always wanted to work with aeroplanes. However, after several people approached him while he worked at LaGuardia Airport, he decided to give modelling a try – and was an overnight success. One of his main clients is Hugo Boss, though he has also worked with Neiman Marcus, Mercedes-Benz, Brunello Cucinelli, Ethan Allen, Tommy Hilfiger and Bloomingdales.

Gage Cass:
Gage is the artist of the group and loves providing his creative flair to each project. In his spare time, Gage works as a designer on large scale performance pieces for creative festivals such as Burning Man and Art Basel Miami as well as other private events in the New York area. Gage recently has expanded from modelling for clients such as Jose Cuervo, Coke Zero, Gilded Age, 2(X)IST and Microsoft, to stunts and acrobatics.

Donny Ware:
The funny guy with great hair and an unforgettable laugh, Donny owns the fact that he is good-looking and is not one to take things too seriously. He may be the comic relief of the crew but his experience working on home remodels includes running heavy equipment and digging trenches. A car accident five years ago left his face partially burnt, and after a hard recovery, Donny is now in demand both nationally and internationally, modelling for Abercrombie & Fitch, Lacoste, Michael Kors, Bottega Veneta and Ted Baker, to name a few.

Mike Keute:
Raised in a family of 'Fix Its," Mike learned from an early age how to be handy around the house. He excels in carpentry and organisational-inspired design and recently remodelled his penthouse loft into a stunning three-bedroom apartment. His good looks have led to an impressive national and international modelling career, and he consistently serves as Calvin Klein's main underwear model and has worked for such clients as Giorgio Armani, Brunello Cucinelli, Saks Fifth Avenue, GQ and Men's Health. In addition, Mike is pursuing his law degree and MBA simultaneously at Fordham Law School through an accelerated three-year program – a first for any student at the university.

Kim Gieske:
Top interior designer and home stylist Kim collaborates with the Hott and Handy team on their client services. Her celebrity client list includes Gwyneth Paltrow, Chloe Sevigny, Donatella Versace, Pamela Anderson, Martha Stewart and Ivanka Trump, among others. A former model, Kim's passion for home and fashion led to a career as a lifestyle editor for such magazines as Glamour, Self, House & Garden and Vogue Living.

'Built" premieres on Wednesday, March 6th at 9:30pm AEDT only on Style.
(Style Network is available on Foxtel on Channel 122)