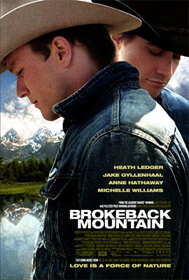 Thanks to Roadshow Films here is your chance to win tickets to Brokeback Mountain.

From Academy Award-winning filmmaker Ang Lee comes an epic American love story, Brokeback Mountain, the winner of the Golden Lion Award for Best Picture at the 2005 Venice International Film Festival. The film is based on the short story by Pulitzer Prize-winning author Annie Proulx and adapted for the screen by the team of Pulitzer Prize-winning author Larry McMurtry and Diana Ossana.

Set against the sweeping vistas of Wyoming and Texas, the film tells the story of two young men - a ranch-hand and a rodeo cowboy - who meet in the summer of 1963, and unexpectedly forge a lifelong connection, one whose complications, joys, and tragedies provide a testament to the endurance and power of love.