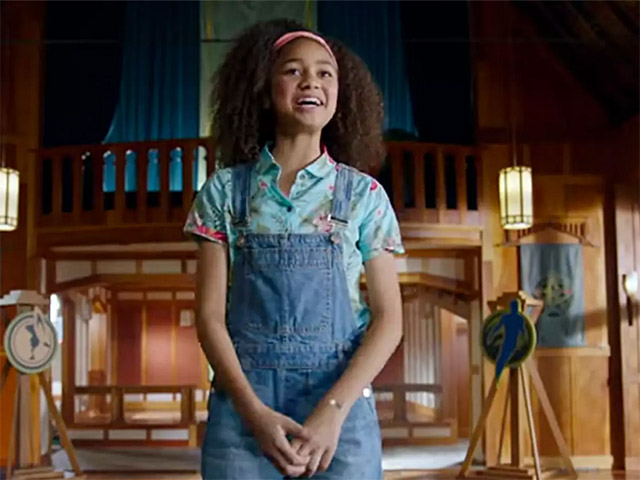 African American-Salvadoran superstar in the making Izabela Rose is poised to follow in the footsteps of Disney legends Zendaya, Selena Gomez, and Demi Lovato as she leads the cast of the new Disney Channel original film THE CURIOUS CASE OF DOLPHIN BAY, which premieres Saturday, June 11th. Rose, who also Shadow Produced/Directed on the film, additionally starred as the lead in the 2020 hit Disney Channel original film UPSIDE-DOWN MAGIC.

THE CURIOUS CASE OF DOLPHIN BAY, which filmed in Brisbane, Australia, follows 15-year-old 'Quinn Perkins' (Izabela Rose), who travels to Australia to spend the summer working as a marine biologist intern with her best friend 'Daniela'. Mysterious events start to occur, and they assume that they are being haunted by local legend Everly Fallow. With aspirations to also step behind-the-camera herself, Rose asked producers if she could Shadow Produce/Direct on the film in order to gain valuable first-hand experience in those fields. Director Christine Luby (AQUAMAN) took her under her wing and set up special meetings with her to discuss the script, production details, and other important aspects of the film. Rose, who was just 14 years old while filming, also learned how cameras worked and got approvals over hair & makeup, daily stills, and the final film poster. While in Queensland and to prepare for the role, Rose also immersed herself in learning about the ecosystem of our oceans, and in particular the devastations to The Great Barrier Reef due to climate change. Wanting to make a difference herself, she partnered with the non-profit Coral Gardeners and adopted her own coral reef systems.

Based on The New York Times best-selling Scholastic fantasy fiction books of the same name, UPSIDE-DOWN MAGIC centers around 13-year old 'Nory Boxwood Horace' (Izabela Rose), who discovers she has the ability to transform into animals, as she enters the Sage Academy for magical studies with her friend Reina Carvajal (Siena Agudong), who can manipulate flames. Izabela Rose gives a standout performance as the funny, charismatic, and optimistic heroine, whose unwavering belief that her unusual talent, along with those of her wonky friends, are just as valuable as those of her peers. UPSIDE-DOWN MAGIC Trailer:

Originally hailing from Flowery Ranch, Georgia, Izabela discovered her love of performing at an early age when she began modeling and competing in pageants all over the Southeast. It wasn't long before she realized her future was in entertainment, and by 2016 she had booked her first commercial for ABC Family. Soon after, she relocated to Los Angeles to pursue her twin passions of acting and singing. Steven Spielberg personally selected her for the role of 'Olivia' in AppleTV+'s reimagining of the classic anthology series "Amazing Stories," and also recently starred in the Disney Channel series "The Secrets of Sulphur Springs."

When she is not in front of the camera or honing her craft, Izabela spends her time volunteering with the Atlanta Mission and other charities dedicated to helping the homeless, a cause close to her heart. She also enjoys playing video games (Minecraft and Roblox are her favorites!), guitar and is learning to speak Spanish.