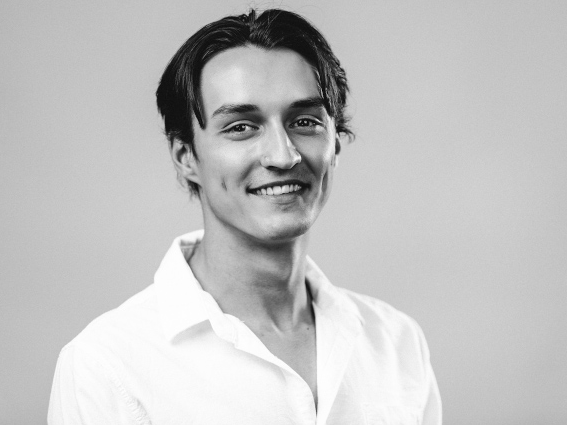 Making use of a refined story-telling style, Joseph dives into the sea of joy that love can bring while holding onto raised red flags. The song successfully conveys the beautiful intricacy of human relations, full of contradictions and baggage that can only be faced up with understanding and support. In times when disconnection seems to be the norm, Baldwin comes to remind listeners taking chances is a virtue- and fun especially during these times.

On the single, Joseph says "It might help to remind people of all the silly and unique things they love about their partners, helping them get through these weird times. If anything, I want them to reflect on the things that initially caught their eye in all the people they love."

'Mymind' gets to us after his recently released EP 'On My Way to Her' to prove Joseph's electric folk with a pinch of pop is here to stay. His work mixes acoustic and MIDI with delightful dynamics that remind the listener of the delectation that can be found in clean simple beats.

Influenced by artists of the likes of Jon Bellion, Death Cab for a Cutie and The Beach Boys, Joseph carefully picks his beats and combines them with flawless vocals and genuine lyrics.

The choice of instrumentation and changes in texture throughout the track contribute to the consolidation of Baldwin as composer, musician and singer.

Bendigo born and raised, Joseph moved to Melbourne in 2017 after graduating school. The singer song-writer took his first steps in the scenic arts as a teenager, Joseph is now an incredibly resourceful artist able to put into words and music what most of us only struggle to understand.

Joseph Baldwin : I would say a blend between pop and alternative, taking inspiration from Jon Bellion's intricate instrumentals and Death Cab for a Cutie's narrative styled lyrics


Question: Can you tell us about Mymind?

Joseph Baldwin : 'Mymind' is really about loneliness hidden, behind love inspired lyrics. It's about, in times of loneliness, how you can feel a whole lot better by thinking of people you love, and specific things that you love about them.

Joseph Baldwin : I wrote it about a year ago when I was feeling pretty isolated and lonely. I wanted to create something that felt triumphant and ensemble-like, while still getting the feeling of loneliness across.

Joseph Baldwin : That if they're feeling lonely, particularly in the current climate we're in, to remind themselves of all the things they love about the people in their life.

Joseph Baldwin : While performing is heaps of fun, I prefer recording as I can spend days on end just making things to express how I'm feeling at the time. At the end of it, you have something you can look back on in the future, kind of like an emotional time machine.

Joseph Baldwin : On My Way to Her. It was my first single and probably the most fun, happy beat I've made!

Joseph Baldwin : Jon Bellion - that guy's music has inspired so much of what I create. Would be awesome for him to see it!

Joseph Baldwin : A lot of the time it isn't anything specific, but more of how I'm feeling at the time. My life is too boring to write about, so I base the lyrics on feelings inspired by things rather than writing about the actual things that are going on in my life. In terms of motivation, I write because it's fun and I never set expectations on my music otherwise I'll just be replicating, and not creating.

Joseph Baldwin : Dua Lipa's new album is ridiculously good, but I've been relistening to a lot of The Beach Boys actually!

Joseph Baldwin : I got to a point where I was pretty happy with what I was making, and just wanted to share it with my friends initially.

Joseph Baldwin : It feels weird, almost as if I'm detached from it!

Joseph Baldwin : Not being too harsh on myself but also being critical enough to not produce a below standard product.

Joseph Baldwin : At the moment, not much is happening! I'm still at uni so a lot of my time is spent studying. In my breaks I'll be on the piano just mucking around, and then probably watch a movie in the evening! Super chill times at the moment!

Joseph Baldwin : I'm currently working on my next EP! This one will be longer and have a much more diverse range of styles! Stay tuned for announcements!