Twelve-year-old Florian and his beloved Collie Lassie are inseparable and best friends. They live happily in an idyllic village in southern Germany. When Florian's father loses his job, the family has to move into a smaller flat - no dogs allowed. Florian is devastated and has to give Lassie away. Lassie is placed in the hands of Count von Sprengel, who travels to the North Sea with her and his exuberant granddaughter Priscilla (12). When the count's mean caretaker starts treating Lassie badly, she takes the opportunity to escape and begins an adventurous journey across Germany, always in search of Flo. But Lassie is not the only one who has set off on a journey. Flo also can't stand it any longer and starts looking for his dog. The two can't be beaten that easy!

Lassie, the most famous dog in film history, is back on cinema screens. The heartwarming story of the inseparable friendship between a boy and his Collie dog is based on the well-known original novel by Eric Knight. The family entertainment adventure is produced by Henning Ferber through his LCH Film UG in co-production with Warner Bros. Film Productions Germany, Suedstern Film, and Traumfabrik Babelsberg. Warner Bros. will release the film theatrically in Germany. The film received backing from Medienboard Berlin-Brandenburg, Filmförderung Hamburg Schleswig-Holstein, Film- und Medienstiftung NRW, MFG Medien- und Filmgesellschaft Baden-Württemberg, and the German Federal Film Fund (DFFF) as well as the Czech Film Fund.

The international search for Lassie began even before the first actor had been invited to audition. "There aren't any collies classically trained for film in Germany because they are immediately associated with Lassie, but no Lassie films had been shot in Germany until now," Henning Ferber explains the main problem. Consequently, young collies had to be found and specially trained for this production. Renate Hiltl, owner of Renate's Film-Animal-Ranch in Wang, Upper Bavaria, could hardly believe her luck when she was given the job: "I became a film animal trainer because I'd watched 'Lassie' as a child. In this respect, this project is like an accolade for me."
A year and a half before filming started, Renate Hiltl found three young collies in Europe and the USA who were visually worth considering: "they are American collies which is particularly important because their white blaze corresponds to our idea of Lassie, while there are usually only collies with brown faces in Europe." During the training with the three dogs called Bandit, Bailey and Buddy, it quickly became clear that Bandit would later become the main dog in front of the camera. "The most important thing about a film dog is that he likes to be the centre of attention, is easily motivated and likes to work with lots of people", says Renate Hiltl, "that's not that easy with a herding dog because he really only needs his pack and his family, and nobody else. Bandit, on the other hand, had always wanted to be the centre of attention ever since we got him at the age of five months. He's a perfect Lassie."
There's a tradition in "Lassie" film adaptations that the female collie is played by males: they have a denser coat and thus more beautiful hair. Renate Hiltl and her team used the two-year-old Bandit in 90 percent of the film scenes, while four-year-old Bailey and five-year-old Buddy appeared in the remaining ones. The film animal trainer points out that "George Clooney has his stuntman and his photo doubles" and reveals a little production secret: "our main dog has two white spots on his back that had to be covered up with makeup before every scene to match Bandit's doubles." The film animal trainers also took care of the styling of the Collies for various stages of the great adventure: "At the beginning, Lassie is a well-groomed and beautifully brushed dog, but, on the journey back to Flo, the coat becomes increasingly unkempt and dirty. That's why the dog was always made up at each location to
maintain continuity." 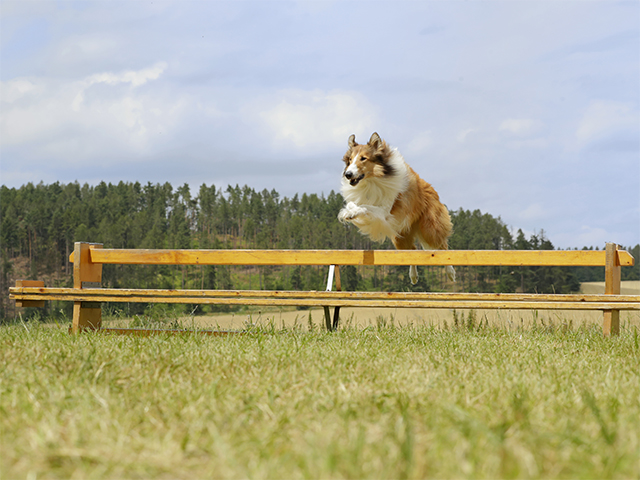