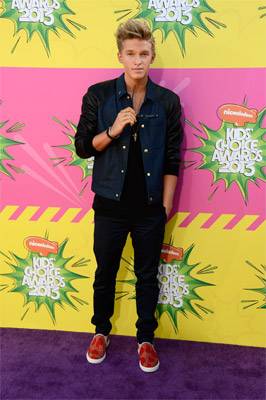 Mega-stars including Katy Perry, Selena Gomez, Justin Bieber, One Direction, Kristen Stewart, Dwayne Johnson, LeBron James and Johnny Depp reigned as this year's favourites, winning top honours at the Nickelodeon's 26th Annual Kids' Choice Awards in LA. Hosted by the biggest kid in Hollywood, Josh Duhamel, the awards were broadcast in the US live from the Galen Center at USC in Los Angeles, where kids honoured their favourites from the worlds of film, music, sports and television. This year, a record-breaking 387 million votes were cast around the world in 22 categories.

Aussie star-power on the Orange Carpet this year included Cody Simpson, who had freshly landed back in LA after supporting Justin Bieber on tour in Europe, as well as the boys from Justice Crew. Leading into the awards, guest correspondent Daniella Monet (Victorious) was joined by Nickelodeon Australia's Luke and Wyatt for a very special KCA pre-show, Kids' Choice Countdown. Fans at home will be treated to awesome behind-the-scenes coverage of the KCAs in tonight's local broadcast – from silly moments with their favourite stars to unexpected surprises. Kids will also get to see exclusive celebrity interviews and get an up-close-and-personal tour of the fun-filled orange carpet featuring tonnes of interactive elements, including a trampoline, wacky props, special effects, and more. Then throughout the show, kids can check out Luke & Wyatt's behind the scenes all-access interviews with the stars on-line at www.nickelodeon.com.au.

In the spirit of the star-studded slimefest, Duhamel kicked off the celebration by singing a special Kids' Choice Awards version of Pitbull's smash hit 'Don't Stop the Party," as he made his way from the dressing room to the main stage.

Experiencing a series of random celebrity encounters along the way, Duhamel thumb wrestled with Mike 'The Miz" Mizanin, was tackled by Jerry Trainor dressed as a Yeti, wore the same dress as Fergie, scatted with Steven Tyler and played an elaborate game of rock-paper-scissors with Megan Fox, only to be transformed into Pitbull himself at the end.

For the first time ever, a special slime camera gave the fans a 360-degree view of all the action on stage. Also a first for the messfest, Nickelodeon debuted the 'Kids' Choice Mustache Cam," a take on the popular 'kissing cam," which featured kids and celebs including Miranda Cosgrove, Debby Ryan and Bridgit Mendler wearing fake funny mustaches, with Duhamel singling out Judd Apatow for having the best real mustache. In a display of his athletic prowess, Duhamel challenged Dwight Howard to a 'Slime Dunk" contest with the winner, Howard, getting a face full of the green goo. With the wave of a magic wand, Sandra Bullock and Neil Patrick Harris attempted to create a slime-free zone, but their plan backfired and the two were honored with a dual sliming at the presenters podium. Duhamel teamed up with Nick Cannon for the Tandem Buttkicking Zipline Sumo Spectacular in a slime-tastic finale thanks to blimp recipient Dwayne Johnson, but Josh Hutcherson and Amanda Seyfried took the prize for the most epic sliming on the show.

In addition to 'Don't Stop the Party," global superstar Pitbull performed his explosive hit 'Feel This Moment" with Grammy Award-winning vocalist Christina Aguilera and a crew of mini lookalike dancers, and found himself drenched by a massive slime fountain at the end of the song. International music sensation Ke$ha rocked the stage amid bubbles, confetti and disco balls, with a medley of 'We R Who We R" and her new single 'C'Mon." Not to be outdone, Duhamel, decked out in a milkshake costume, got his groove on with the kids in the audience during a special 'Kids' Choice Shake" dance stunt.

Kids paid tribute to their Favourites by casting over 387 million votes in 22 categories. In addition to the KCA2013.com website, families were able to vote via the Nick mobile website and through a KCA app for the iPad, iPhone, and iPod. Fans were also able to vote for their favourite stars using Nickelodeon Australia's Facebook page. Users voted from a tab on the page and, for the first time ever, the entire voting experience could be embedded directly into Facebook wall posts. Also new this year, fans were able to vote for their Favourite nominees on Twitter through the use of custom hash tags and SMS subscribers could vote on a category per day for the three weeks leading up to the event. 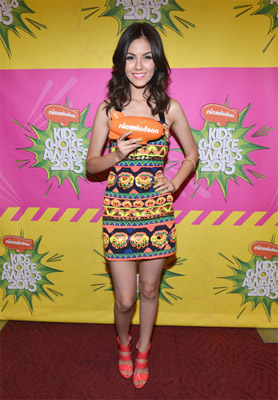 Nickelodeon upped the digital presence of the 26th Annual Kids' Choice Awards across a variety of platforms that included cross-platform interactive experiences, before and after the big show, on Nickelodeon websites, Twitter, Facebook, Instagram and mobile and iOS devices. Exclusive Nick cameras offered multiple viewing angles and were featured alongside celebrity tweets, interactive polls, real-time updates and photos from the orange carpet and backstage. Fans can relive their favourite show moments by watching video highlights from the live show, flipping through orange carpet, live event and performance photos and read through recaps. The app and website feature clips and photos from past Nickelodeon Kids' Choice Awards shows, along with promotional spots, dedicated information pages on Duhamel and nominees, a KCA news blog, trivia, personality quizzes and two new KCA-themed online games.

Leading into the awards, guest correspondent Daniella Monet (Victorious) will be joined by Nickelodeon Australia's Luke and Wyatt for a very special KCA pre-show, Kids' Choice Countdown. Fans at home will be treated to awesome behind-the-scenes coverage of the KCAs – from silly moments with their favourite stars to unexpected surprises. Kids will also get to see exclusive celebrity interviews and get an up-close-and-personal tour of the fun-filled orange carpet featuring tonnes of interactive elements, including a trampoline, wacky props, special effects, and more. Then throughout the show, kids can check out Luke & Wyatt's behind the scenes all-access interviews with the stars on-line at www.nickelodeon.com.au.

The 2013 Nickelodeon Kids' Choice Awards will be seen in more than 350 million households around the world and in more than 25 languages. Within hours of airing live in the United States and Canada, the show will roll out internationally, providing kids around the world the opportunity to tune into their local Nickelodeon channel to enjoy the show faster than ever. In Australia the 2013 KCAs will feature five Aussie-specific award categories, as included above. Voting for the 2013 KCAs will span over six continents across 16 localised voting sites, giving kids practically everywhere the chance to decide who takes home a coveted blimp.

Last year, Nickelodeon's 2012 Kids' Choice Awards, hosted by Will Smith, ranked in the U.S. as basic cable's top telecast for the week (March 26, 2012–April 1, 2012) with 6.2 million total viewers. The show also ranked as the week's top telecast with kids and tweens on all TV. For the first time Aussie kids were able to vote in the U.S. KCAs which helped the star-studded telecast score the most votes in the show's history"a record 223 million (+11%, over 2011). Votes were cast across Nick.com, Nick's mobile site, brand-new iPhone/iPad/iPod Touch apps, an iPad-optimised site, an application on Nick's Facebook page and via Twitter and custom hash tags. In another KCA first, last year Cody Simpson joined the star-studded line up and took to the Kids' Choice Awards stage in LA to claim the blimp for Favourite Aussie Superstar, as voted by the kids of Australia and presented by Luke and Wyatt. In Australia, the 2012 Kids' Choice Awards was the highest rated KCAs ever!