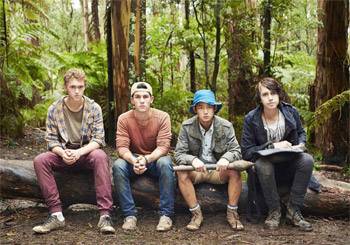 Follow the action-packed adventures of four mismatched teenage boys who return from a school excursion to discover they're stuck in a parallel world into which they were never born, during ABC3's new fantasy series, Nowhere Boys (13 x 26 min).

Combining supernatural action-adventure elements with comedy and genuine human drama, the series tracks the journey of alpha jock Jake (Matthew Testro), Goth Felix (Dougie Baldwin), nerd Andy (Joel Lok) and the golden child Sam (Rahart Sadiqzai) in their quest to find out what happened to them and how they can return home.

The series begins when the boys get lost while trekking through dense forest on a school excursion. After surviving a terrifying night trapped by a violent lightning storm the boys expect a heroic reception when they return home. Instead they discover that they are now total strangers to their friends and families – they don't exist anymore. All public records of them have vanished and the world has reconfigured itself, Felix's disabled brother can walk and Jake's struggling parents are now leading successful lives.

As relationships are tested and new alliances and friendships are forged, the boys are forced to come together to protect themselves against the demonic force, uncover the mystery surrounding them, and find their way home.

Nowhere Boys: The 5th Boy is an interactive game which offers fans a unique online experience and an exciting companion to the TV series. Available on the ABC3 website from Thursday, November 7, the game invites players to take on the persona of a fifth boy who, like the Nowhere Boys of the series, is lost in a strange world and must find his way home.

There is an exciting and unique crossover created between the game and the TV series for our fans. These two platforms have been carefully intertwined to give the player the feeling that they are directly influencing outcomes on the TV show.