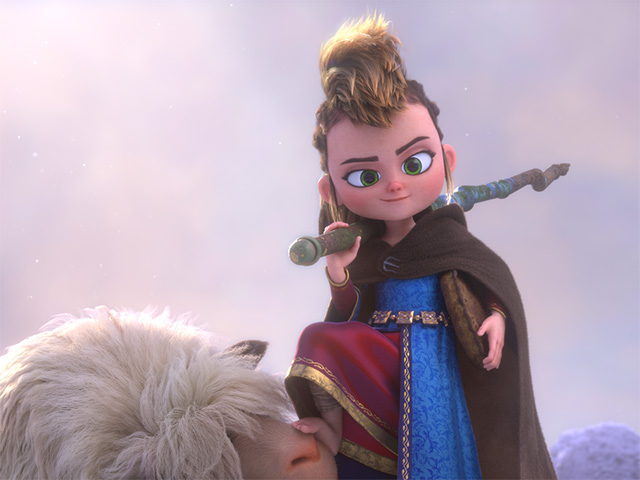 Written and directed by Julien Fournet

Pil is a young orphan living in the medieval city of Foggyburgh. One day, the cruel regent Tristain curses Roland, the heir to the throne, by changing him into a "chickat" (half chicken, half cat). To save Roland and the kingdom, Pil embarks on a quest for the antidote, along with Graubart, a clumsy guard with a good heart, Jiggler, a young loony jester, and her three tamed weasels. From the Cursed Forest to the Glen of the Beast, Pil and her unlikely companions live their greatest adventure and find the family they never had.

Pil is a young twelve years-old orphan who grew up on the streets. She is dressed in rags, covered in filth,and has spiky hair.  Vagabond life and misery made her suspicious, individualistic, and thieving, but also very resourceful and cunning.  Endowed with extraordinary agility, she never goes anywhere without her three tamed weasels who help her in all situations.  Hot-headed and mischievous, she combines stunts and acrobatics in action sequences full of humour.  Following a misunderstanding, she finds herself embroiled on a quest to save Roland, the Crown Prince, who is victim of an enchantment.  The guard Graubartand the jester Jiggler join her in this initiatory journey.  Thanks to her new adventure companions, Pil discovers friendship, generosity, courage, and solidarity.  She will learn to share, to take an interest in others, and will discover that true nobility is that of the heart.

Pil and her tamed weasels are inseparable. Without the little girl even having to give them orders, they gush out ofher sleeves and help her climb or steal food. They react to their mistress's emotions by showing their teeth when she is angry, or by squeaking with fear when she is in danger.  They can also help Pil disguise herself: perched on her head, they act like a wig, coiled around her chin they can be a false beard... Gobbly is not as agile and disciplined as the other weasels. She is terribly greedy and unable to control herself when she sees pastries, which will drag Pil into tricky situations on many occasions...

Graubart–A knight who breaks the codes

A slow-witted and clumsy guard, Graubart is nothingl ike a proud knight in shining armour! Serving the regent Tristain, he spends most of his time trying to trap Pil, whom he believes to be a sprite. He is constantly bullied and humiliated by the other guards and Tristain, but he does not rebel against them because his greatest dream is to be made a knight. When he meets Pil, he mistakes her for a princess because of her dress. The young gir lpromises to dub him and, without thinking twice, he is ready to follow her in all her adventures!

Jiggler is a young thirteen-year-old jester, dressed in a ridiculous outfit and a hat with bells.  He never leaves his little sock puppet, Mister Dastardo, and makes it talk thanks to his ventriloquist skills.  Surprisingly for a jester, Jiggleris rather timid, and his puns are as patheticas they are harmless.  Mister Dastardo is his "Mr. Hyde"': The puppet has an unbounded brazenness! It does not hesitate to mock the nobles and tell the most caustic jokes.  Jiggler often quarrels with Mister Dastardo, whose nerve he envies: He is convinced that the sock has the comic talent that he lacks.

Regent of the kingdom, Tristain is a charismatic man, endowed with cynicism and limitless selfishness. He does not act out of sheer cruelty, but to maintain his place on the throne and his privileges.  To do so, he does not hesitate to betray the Crown Prince Roland, to oppress his people or to send a horde of mercenaries after Pil.  The only being for whom Tristain feels a sincere affection is his little dog Nugget. He talks to her as if she were a child, with a ridiculous high-pitched voice.

Roland is a fiery eighteen-year-old, chivalrous and a little too naive. As he prepares to inherit the throne of his father, the regent Tristain poisons him in order to stay in power. But the potion doesn't kill Roland, it turns him into...a "chickat" (half chicken, half cat).  It is in this ridiculous form that the poor prince will follow Pil and her companions in search of an antidote.  Once his human appearance recovered, Roland will experience after effects from his transformation, and will continue to cluck or meow from time to time...