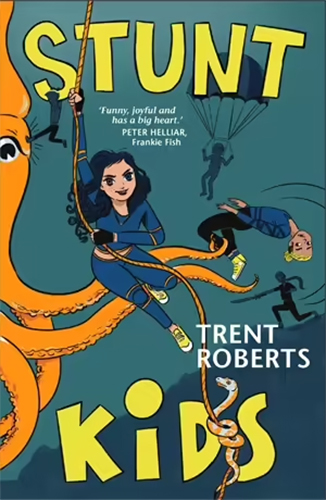 After 'The Accident', Gretel's parents wrapped her in cotton wool. (Not literally, that would be ridiculously itchy.) They wouldn't let her do anything slightly dangerous. No running. No jumping. No dancing. She wasn't even allowed to take out the rubbish in case she rolled the wheelie bin over her foot.


So when she finds herself at a Stunt Camp where daredevil kids jump from great heights, engage in intense combat and flip, twist and tumble like it's the easiest thing in the world, Gretel wants to sink into the floor. No, deeper than that. She wants to sink into the Earth's core where the temperature is a balmy 6000 degrees.

Her first step is to give herself a stunt name, Gypsy Flowers. Next step, face every one of her fears. Not just face them, headbutt them. Especially when she and her new friends are assigned a top secret, highly dangerous mission . . .

The Stunt Kids must find action hero Tom Von Strongberg before he unleashes a hypnotic computer virus . . . a virus that will turn hundreds of millions of kids into mindless zombies.

About the Author
Trent Roberts is a screenwriter and author who lives in the western suburbs of Melbourne with his partner, two kidlets and French bulldog, Ziggy. He loves the ocean, weird animals, indie pop and choc-tops. While he can't do any of the stunts described in this book, he can do a half-decent forward roll and, in perfect conditions, remain upright on his surfboard for a few seconds.