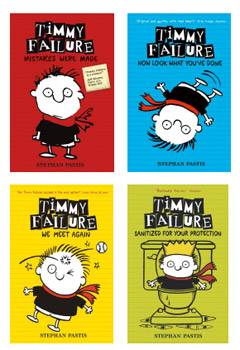 Timmy Failure, CEO of Total Failure Inc., aka 'Sherlock Hopeless," has won the hearts and minds of readers across Australia. Created by created by award-winning cartoonist Stephan Pastis, the series has sold over 100,000 books in Australia since February 2014. Over four installments to date, Timmy and his 1500 pound polar bear sidekick Total have cemented themselves as firm favourites for readers aged 9+.

Stephan Pastis' dry humour and comic illustrative style, coupled with the soft heart of each story has established the Timmy Failure books as must haves in the school playground. Timmy Failure is also the newest addition to top tween gaming website PopTropica, with the website receiving 25,000 hits each month in Australia alone. On the Timmy Failure Island on PopTropica, each player is tasked with a mission to solve mysteries, and who better to help them than a number one private detective like Timmy Failure.

The Walker Books Group is committed to supporting the Timmy Failure series with extensive global marketing and publicity campaigns, with the 2016 publishing program seeing the paperback release of Timmy Failure books three and four (We Meet Again and Sanitized for Your Protection) and more exciting new publishing announcements coming in 2016.

Stephan Pastis is the author-illustrator of the New York Times bestselling Timmy Failure series. The first book, Timmy Failure: Mistakes Were Made, was a 2014 Booktrust Best Book Awards winner and listed as one of 100 Modern Children's Classics by The Sunday Times. Stephan is also the creator of the devoutly followed comic strip Pearls Before Swine, which appears in more than 700 newspapers worldwide. His compilation Larry in Wonderland debuted at No. 1 on the New York Times bestseller list for paperback graphic novels