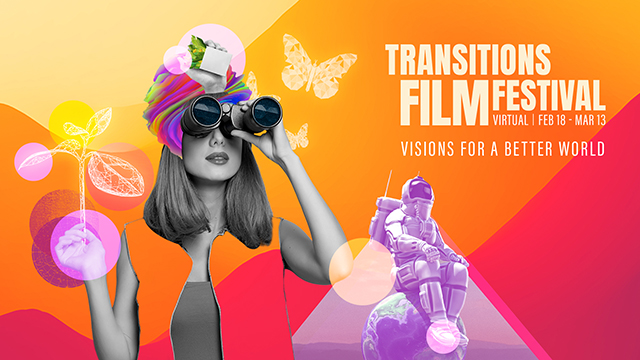 "VISIONS FOR A BETTER WORLD"

The Transitions Film Festival returns this February with an enthralling program of world-changing documentaries about the existential challenges, creative innovations and heroic pioneers helping us to envision a better world.

The program features over 20 virtual sessions available online, nationwide, as well as a small selection of screenings in Melbourne.

Highlights of this year's line-up include Ecocide, a narrative legal drama set in the fictional world of 2034 that sees Germany's Angela Merkel put on trial for a failure to act on climate change, and Youth Vs Gov, which follows 21 plaintiffs under the age of 21, who sue the American government for failing to protect them from the climate crisis. The Seeds of Vandana Shiva paints an intimate portrait of one of the world's leading environmental activists and First We Eat follows filmmaker Suzanne Crocker and her family on a one-year experimental challenge to live entirely off food that can be grown, gathered, or sourced locally.

Our mind-blowing future is illuminated in A.rtificial I.mmortality, which explores digital immortality and post-biological life, and Father of The Cyborgs, which gives us an intimate glimpse into the brazen and fearless life of an inventor of brain-computer interfaces, who went on to use himself as an experimental subject.

With an emphasis on the greatest threats facing humanity and the solutions to our collective challenges, this year's festival features a huge line-up of films about climate change, activism, biodiversity, plastics, economics, and innovation.

In an era of accelerating change and unprecedented disruption, Transitions Film Festival celebrates the things we love and inspires us to fight for the future we want.

WHERE: Melbourne CBD and Online