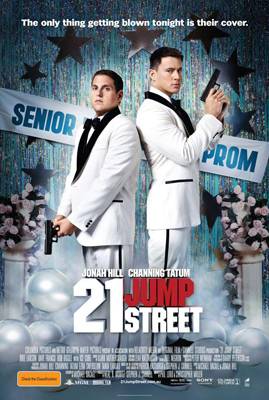 Synopsis: In the action-comedy 21 Jump Street, Schmidt (Jonah Hill) and Jenko (Channing Tatum) are more than ready to leave their adolescent problems behind. Joining the police force and the secret Jump Street unit, they go undercover in a local high school to investigate a dangerous drug ring. As they trade in their guns for backpacks, they realise they must confront the terror and anxiety of being a teenager again and all the issues they thought they had left behind.

Verdict: 21 Jump Street is everything you want it to be and more. This laugh out loud comedy remake of the original 80's TV series has earned a MA rating with excessive profanity, crude humour, drugs and violence.

Schmidt (Jonah Hill) a high school nerd and handsome jock Jenko (Channing Tatum) team up at police academy to help with each other's weaknesses; upon graduating they're assigned to park patrol. After proving their incompetence during a park arrest they are sent to the 21 Jump Street division.
Their first assignment is to go back to high school and stop a new drug spreading from school to school by finding the dealers and supplier.

The entire film is extremely well cast; Ice Cube represents Captain Dickson of 21 Jump St and with every single line the audiences is in fits of giggles. Channing Tatum fits perfectly into the handsome prom king role he is revising whilst Jonah Hill is unmistakably playing the smart wimpy kid.

Spoiler: There are, of course, some cameos by original 21 Jump Street cast members - I'm not telling you who or when because they are well hidden and wonderfully presented.
Hilariously funny yet smart 21 Jump Street is the perfect no-brainer action comedy film that will certainly be enjoyed by all audiences; surprisingly the film is very fast-paced and exceeded all of my expectations.
Rating: ****