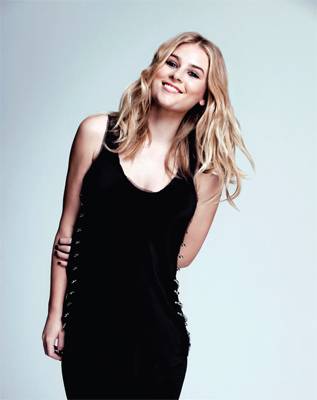 Hey, you know about pretty girls, right? Pretty girls get life dished up to them on a plate, with little effort or talent. Gratis. Too easy. It's either marry a media magnate or loll about on beaches complaining in interviews about all the 'work" they're doing (and how they were a tomboy as a kid). Right? Usually. But then, you haven't met Carissa Walford. For her, being a pretty girl isn't just about careless pouting beachside, but a license to work harder, in more directions and against the tide of expectation that pretty is just that.

How do we know this? Because 23-year-old Carissa Walford has chops. Since before she donated her first enamel to the Tooth Fairy, she has sung, danced, studied, kept in shape, presented and worked her sometimes bikini'ed tail off to get her here, on the Channel [V] madness.

The daughter of a singer/drummer (Dad thumped the skins for Marcia Hines, once upon a time), Carissa – like many of the young misses of the age – loved Tina Arena. She learned to hotstep it at the Australian College of Entertainment (Delta Goodrem and Bec Cartwright are alumni) and proceeded to learn the art of show at Masque and the Bradford Dance Academy for the rest of her non-voting years.

But all the education in the world won't equip you for the work. So she worked. Carissa Walford has modelled and danced through Asia and the Pacific, she's done the beachside pert'n'pout, including campaigns for Big Australia and Sea Folly. She's paid dues singing in suburban barns, belting out ballsy R'n'B and soul covers to baying, grooving punters; a good preparation when performing for the baying, swaying punters at an NRL grand final: 'That was cool," she laughs. The song she wants to sing when she gets home from the pub? Etta James's At Last. She could probably supply a soft shoe tap routine, too.

In front of the camera, she flashed by in a bundle of commercials, spent a few episodes in Summer Bay, then made the switch to presenting, helping the surfing and skating fraternity twitch into consciousness every Sunday as one of the go-anywhere, do-anything Smokin' Hotties on Fox Sports' Fuel TV. She did it for five years. Five years. You get less than that for burglary (and you don't have to wear a bikini… hopefully). The Hotties worked the Australian franchise of US comedy cack Web Soup, before Carissa flew to Los Angeles last year to fill in for iconic host Olivia Munn on every nerd's favourite program, Attack Of The Show!. Oh, how the internet frothed. There's more, but let's talk about…

Talent farm Channel V realised it. Apart from the hotness, the years of jazz and tap and the work ethic, Ms Walford is funny, feisty and has an opinion. On her singing career, she is droll: 'Yeah, I wanted to be a recording artist, but then realised I needed to win Australian Idol. Instead I worked my arse off."

She thrives on urban music and lapped up Kanye West at Coachella earlier in the year. 'He was the highlight for sure. Especially because I'd seen him a few times before and been really disappointed. At Coachella he was amazing. So were Angus and Julia Stone."

Oh, yeah. When it comes to music, she loves it all.
And that's why Channel [V] loves Carissa Walford.

Carissa Walford: Wake up, head into work and film WTF! or research stories, write scripts and shoot segments for live Saturday morning show, The Riff. It's so much fun coming to work and being able to chat about music and all the latest gossip in the news that's dropped, and deliver it to our viewers every day.


Question: What do you bring to the Channel V team?

Carissa Walford: A big mouth. Ha! Hopefully I'm just pleasant to work with. I just want to make people laugh and bring a fun happy vibe to the team.


Question: What do you see for yourself, in the future?


Question: What's the most played album, on your iPod?

Carissa Walford: Right now it's Foster The People's Torches. I don't stop listening to an album until I know all the words to every song.

Carissa Walford: My dad. He is a singer and so am I and I love music and was around it from a small age. I didn't know any better. From what I remember, I always wanted to work in the music/ entertainment industry.

Carissa Walford: No, but we all try to be hilarious and change the lyrics to well known songs for our clip parody's we do for The Riff.

Carissa Walford: I did every job that was thrown at me and didn't let down any opportunity even if it was for free. I just wanted everyone to know who I was and what I did so that one day someone would recommend me when a job came up. I nearly gave up but I got the exciting call from Channel [V] after sending my reel in 12 months before and it's been all uphill from there.


Question: Are you a Pub, Bar or Club kind?


Question: Who would you most like to meet and why?

Carissa Walford: Etta James… if she was still alive. She is one of my idols


Question: What is the first thing you do when you wake up in the morning?