Question: Tell us about Teenage Bank Heist, that you just finishing filming?

Davida Williams: Teenage Bank Heist is a film on the Lifetime Movie Network about four teens who decide to rob a bank. It's later revealed in the movie that their reasons for doing so weren't only selfish reasons; at least for three out of four of the girls.


Question: How would you describe your character?

Davida Williams: She's smart and she has a lot to lose with robbing this bank. She is on her way to a great college and career but she has a really big heart and cares deeply for her friends; she is a really great friend.


Question: How are you similar to your character?

Davida Williams: My character is similar to myself in many ways, we both work really hard, back when I was in school I always gave 100%. We are also both really loyal friends, we keep our circle very tight and really look out for our friends.


Question: What originally attracted you to the script of Teenage Bank Heist?

Davida Williams: I have actually always wanted to do a Lifetime Movie, it was definitely on my bucket list. It's very rare that you get to work with an all-female cast as men pretty much run the industry. It was very inspiring to see such hard working, talented women at work.


Question: What was it like to working with Abbie Cobb, Cassi Thompson and Maeve Quinlan?

Davida Williams: They were all great. Abbie Cobb is incredibly talented. I couldn't get over how great Cassi Thompson was too, she's so young and sometimes I would forget. Maeve Quinlan and I did my favourite scene in the whole movie; it's probably my favourite scene that I've filmed to date.


Question: What was the most difficult part about filming Teenage Bank Heist?

Davida Williams: I think the most difficult part about filming was how intense the script was. I came from Disney where things were much more light hearted than this, I really had to stretch my acting muscle for this one.


Question: What are your 2013 Resolutions?

Davida Williams: I was just reading my resolutions from last year and I think I stuck to most, all of the important ones anyway. One of my resolutions for this year would be to read more; I love to read and there is so much great material out there that I haven't touched. In the age of computers and technology, people forget to read books however I try to go to the library on occasion but I think this year I have to make it more of a priority. I also cut out dairy, I haven't eaten meat in ten years but something about dairy doesn't sit right with me either, I don't like the way I feel after I've eaten it. I have been vegan before, once for almost two years, I hope to keep it going this time. Although I grew up in an Italian household and love cheese!


Question: What originally inspired you to begin acting?

Davida Williams: I think seeing my dad perform was what really inspired me as he was Michael Jackson's guitarist for almost 30 years. I would go on tours and go to studio sessions. Being around creativity is where I felt happiest. 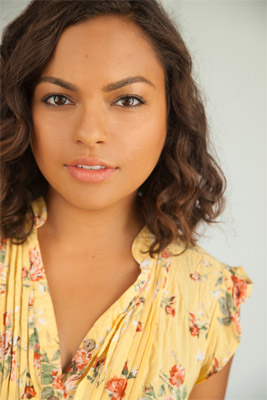 Question: How do you feel when you watch yourself of the big screen?

Davida Williams: It's almost painful, we screened Teenage Bank Heist at the casting director's house and he made a comment about how I was too busy on my phone to watch myself act. My phone was a distraction because I pick myself apart when I watch myself. It's not good for me (laughs)!


Question: What inspires you?

Davida Williams: I've recently started producing my own projects and that has been very inspiring. To see people coming together and working their asses off, not for the money, but because they love what they do, is inspiring to me. It's why everyone should do what they do.


Question: Where would we find you on a Sunday?

Davida Williams: Maybe at the dog park as I have three dogs and I try to take them when I can. Also hiking, I love hiking; when I have time, I love to workout in nature, it's much better I think.


Question: What are you currently working on?

Davida Williams: I just finished shooting an independent pilot called "Any Tom, Dick or Harry", it was written by Hadley Klein and an actor named Carter Jenkins. I like to describe it as an "anti-entourage". They originally approached me to act in it but soon I because producer as well, it was my first time producing in that capacity. I learned so much and we were really fortunate to have a really great cast and crew, we get a first cut at the end of January and I'm so excited to see all the work come together!