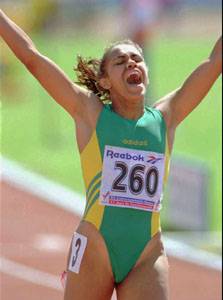 After her exciting performance at the recent Olympic Games and after many requests from our readers, GIRL have decided to once again place the SPORTS SPOTLIGHT on Olympic 400m champion CATHY FREEMAN.


Cathy Freeman burst into the Olympic spotlight at the 1996 Games - the first Aboriginal athlete to represent Australia. She competed in her first race at the tender age of six. Freeman became involved in athletics because she enjoyed running and winning races. Freeman has definitely proved that she is a winner on the track time and time again. Her youth involved running twelve laps barefoot around a grassy track on a regular basis. Freeman's mother used to encourage her to write out "I am the world's greatest athlete", an affirmation which was to ring true some years later. When she was thirteen years of age, Freeman told her school guidance counsellor that her vocational plan was to win an Olympic Gold. She won gold at the Commonwealth Games as part of the 4x100m relay team at the age of sixteen. In 1990, she was awarded the title of Young Australian of the Year and the following year she was awarded Aboriginal Athlete of the Year.

Training Regime: Trains twice daily (except on Sundays); with her full-rest day on Saturdays

Greatest influence on her career: Parents

Best aspect about being an athlete: The general well-being especially physically which results in a high self esteem; travelling aspect is also fantastic.

Your dream career outside athletics: To be in an influential position in the media/TV industry

Pet-hates: Injustices, war and lack of respect for other people

An important lesson life has taught you: Life is what you make of it!

Freeman became the idol of all Australians when she won double gold at the Commonwealth Games in the 200m (also breaking the Australian record) and 400m events.

Her form continued into Europe where she inflicted the first 400m defeat on Perec since the 1992 Olympics at Monte Carlo.

At the 1994 Commonwealth Games, Freeman who is extremely proud of her heritage, took her victory lap with the Aboriginal flag before taking one with the Australian flag. This ignited much discussion and raised awareness regarding Aboriginal and race relations.

Freeman ran a mighty race in Gothenburg to finish fourth in the 400m final and won a bronze medal in the 4x400m relay team. This was followed by wins in the IAAF Grand Prix circuit in Brussels. These performances secured Freeman the Number Two world ranking in 1995.

Freeman ran the race of her life at the 1996 Olympic Games held in Atlanta, becoming the sixth fastest woman ever over 400m, running a Commonwealth record and winning the silver medal behind Perec in perhaps the greatest one lap race of all time.

Freeman then firmly set her sights on the Sydney 2000 Olympic Games, where she won Gold in the 400m race retaining her title as the "Queen of the Track!"