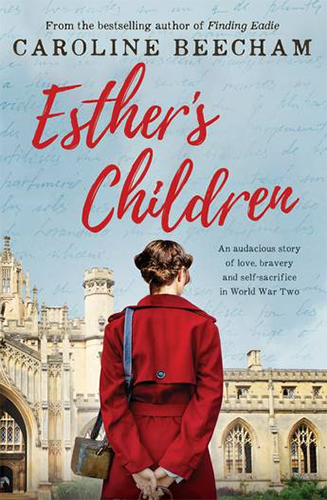 Tess works tirelessly to rescue at-risk academics and scientists from across Europe, trying to find positions for them in Britain and America. In 1938, she secures employment for Harry at Imperial College, London, their love affair intensifying as the world heads into war; yet they are separated once again as Britain moves to intern European refugees.

With Harry detained on the Isle of Man while still waiting for news of his parents, Esther and the Society plead with the government for the interned scientists' release. When Harry is eventually liberated, his future with Esther is by no means secure as he faces an impossible choice.

Confronting the horrific dangers of World War Two with remarkable integrity and bravery, Esther Simpson is revealed as an exceptional heroine.

'[Beecham's] characters are likeable and real, her writing is engaging and the subject matter is gripping.' - The Weekly Times

'This moving story of Alice's fearless pursuit of her baby contains all the ingredients of a spy thriller … A wonderful page-turner with great relevance for our times.' - The Chronicle