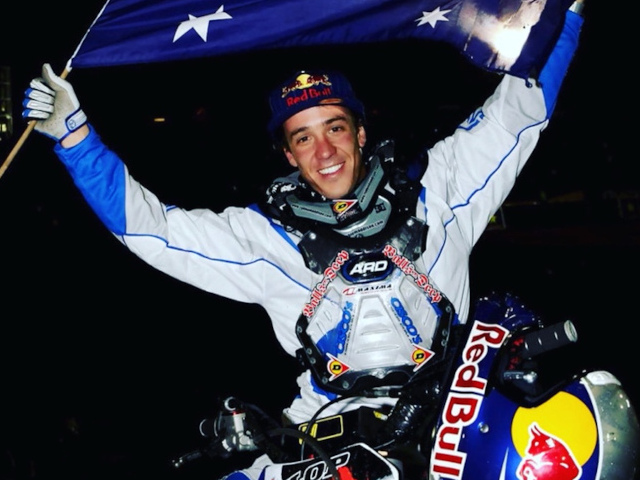 'Undeniably the Greatest Freestyle Motocross Rider of All Time!'

International motocross legend and stunt man, Robbie Maddison will feature alongside Australia's biggest names in Freestyle Motocross at the Central Coast Stadium in Gosford on Saturday 19 February for one exclusive show.

The World Class line up of all-star champion athletes will be bringing their dynamic, jaw- dropping, action-packed production, Freestyle Kings Live to Gosford for one night only! Known as the Evel Knievel of our generation, the global superstar Robbie Maddison will be back in Australia for the first time in three years. An accomplished motocross rider, Robbie has been busy smashing world records, surfing one of the biggest waves of all time on a motorbike - Teahupo'o in Tahiti and doubling as a stuntman for Hollywood superstars Daniel Craig (Skyfall) and Vin Diesel (The Return of Xander Cage).

"I can't wait to get back to Australia with an elite team of riders and crew, these guys are the best in the business, and we are so excited to put on an explosive show for the fans. We have some pretty special stunts planned and world firsts," Said, Robbie Maddison.

Maddison will be appearing exclusively alongside FMX Champion and thirteen-time X Games medallist Rob Adelberg, two-time World Games Champion, Pat Bowden, crowd favourite and X games Gold medallist Jackson Strong. All the way from Japan Gold medallist Taka Higashino, 15-year-old Ry Davis along with Lance Russell from Sydney, veteran rider and local hero's Dayne Kinnaird and Michael 'Chucky' Norris plus many more! The Freestyle Kings have travelled the world performing in Las Vegas, Hollywood, all over the USA, China, Australia and are about to take over the Coast.

The two-hour choregraphed family fun event is guaranteed to keep fans on the edge of their seats with more excitement then you could imagine, death-defying stunts and never seen before world firsts! There will be front flips, double backflips, side by side jumps performed bigger, faster and higher than ever before and hitting heights of over 75 ft from the ground during one huge, choreographed show with pyrotechnics, firebreathers, music, VIP experience, Pit Party and much more.

All riders will appear exclusively to Freestyle Kings Live and won't be seen on any other Freestyle Motocross show.

The family friendly event will cater to fans of all-ages and will give them the opportunity to meet their idols at a pre-event meet and greet in an open air stadium which provides a safe environment for all.