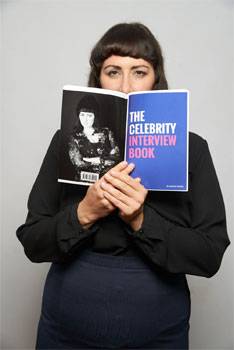 As Katherine Hepburn once said: "If you obey all the rules, you miss all the fun".

The Celebrity Interview Book is a collection of 21 interviews with some of the world's biggest stars who dish their deepest tales. These interviews were conducted by entertainment journalist Nadja Sayej and this is her greatest hits from the past seven years. Her first book, there are photos of the stars from the writer's personal archive, an introduction explaining what it's like meeting them alongside the uncut interview.

For this first volume of interviews, she spoke with Susan Sarandon on spending Christmas with refugees in Greece, Jean Paul Gaultier on making his childhood dream come true, Yoko Ono philosophizing about turning 80, James Franco on making art and Wyclef Jean on the political fate of America.

There are also interviews with Dita Von Teese, Faith Evans and Bill Nye, among others. This book is filled with anecdotes of sneaking into VIP parties (as well as sneaking out of boring ones), speaking up, shouting out, shutting up and letting the bizarre quirks of the rich and famous speak for themselves. They were all possible by going the unconventional route. 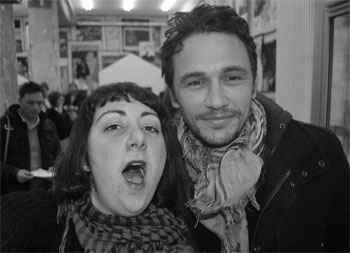 Question: What inspired you to write The Celebrity Interview Book?

Nadja Sayej: Honestly? I was leaving Berlin after seven years and when I looked back, I asked myself: "What did I do here?" The biggest accomplishment, I felt, was interviewing these big stars. Like the time I met David Hasselhoff for the first time, or when I met Yoko Ono in Frankfurt. It was like a kind of closure for me, while sharing what I love to do most; interviewing famous people in a way that shows they're just like everyone else. It's like my greatest hits (or at least the first volume).


Question: Who features in the The Celebrity Interview Book?

Nadja Sayej: I've interviewed Susan Sarandon on spending Christmas with refugees in Greece, Jean Paul Gaultier on making his childhood dream come true, Yoko Ono philosophizing about turning 80, James Franco refusing to talk about weed and Wyclef Jean on the political fate of America. There are also interviews with Dita Von Teese, who chats about colouring her pubic hair, Faith Evans on the spirit of her late husband Biggie Smalls and Bill Nye clapping back to his anti-climate change haters. The interviews here are unlike most you'd read"they're funny, fun, to the point and totally unexpected.


Question: Which of the interviews, over the past seven years, was most memorable and why?

Nadja Sayej: Getting an interview with a celebrity is never easy"I've had to chase people for years and travel across countries for 15-minute time slots, but the anxiety fades away after the first minute upon speaking with them. It's just what makes the chase worthwhile. The book features overlooked celebrities, too. I included my interview with Auma Obama, whose name is recognised because of her brother Barack Obama, but people rarely recognise her on her own, which comes as a surprise in 2018, when female independence is at an all-time high. Even though she isn't a blockbuster name in the book, unlike my other interviews with Patti Smith and James Franco, I wanted to draw attention to Obama for her own accomplishments, which includes her educational foundation for children. 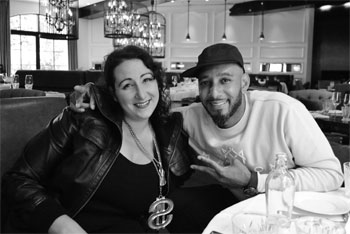 Question: Have you had any seriously cringe-worthy moments whilst interviewing celebrities?

Nadja Sayej: Not really, I can basically connect with anyone in an interview, but I'd say Dita Von Teese was not easy to get to open up, she sometimes likes to keep things on the surface, but totally gushes when talking about her fans, so it was a matter of figuring out what direction to take things (Dita Von Teese loves her fans who impersonate her to the point, she feels they do a better version of her than she does); hilarious!


Question: Which celebrity surprised you the most during an interview?

Nadja Sayej: All of them, something unexpected always happens during interviews and that's why I love my job, but I'd say Jean Paul Gaultier was probably one of the nicest people I've ever met (and he is nice to everyone). The book is sort of like a comedian's diary, because its filled with anecdotes of sneaking into VIP parties (as well as sneaking out of boring ones), speaking up, shouting out, shutting up and letting the bizarre quirks of the rich and famous speak for themselves. These interviews were all possible by going the unconventional route. As Katherine Hepburn once said; "If you obey all the rules, you miss all the fun".


Question: What difficulties did you have to overcome doing all your interviews via Skype?

Nadja Sayej: They weren't all done on Skype, I'd say half of them were. Talking to someone over the phone can actually be an advantage because you likely have them at home, where they are far more focused than a film festival or a press conference, and when you can't see someone you're talking to, you have a tendency to share more, so it has actually worked out to my advantage. But of course, you can't get a photo of them and you can't get a selfie with them (just kidding… not). 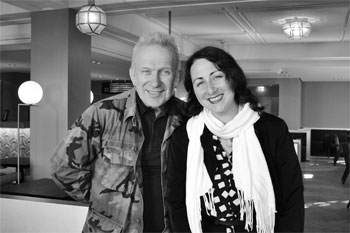 Question: What originally inspired you passion for arts and entertainment journalist?

Nadja Sayej: I started out as an art critic in 2003, but was burned out by 2009 because I found art journalism so tedious, academic and more serious than it needed to be. I injected a bit of fun when I founded my YouTube show ArtStars* TV in 2009 because I believe arts journalism can be fun and accessible and inviting for more people to learn about the arts. I started it by interviewing semi-famous artists in Toronto, and then continued with bigger names when I moved to Berlin in 2010, now I live in Paris and travel for interviews wherever I need to be.

Nadja Sayej: I am on an airplane to Marrakech as I write this, so my next step is finding my luggage. Then, I'm having an art exhibition of my photos, Celebrity Photographs, on view during Paris Fashion Week in March, and then I'll be releasing The Celebrity Interview Book: Volume Two in May. I'm also working on a book of Q&As from the art world, since that's where my roots are. I may interview Jean Paul Gaultier and Wyclef Jean, but I'll still jump at the chance to talk to art stars like Carolee Schneemann and ORLAN (legends in their own right, but known to the younger generation as the artists who inspired Lady Gaga).