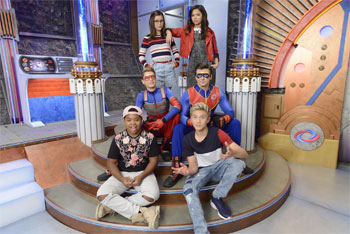 Direct from the USA, the 2018 Nickelodeon Kids' Choice Awards is set to be the biggest and slimiest kid's event on the planet! With powerhouse host John Cena, fan-tastic musical performances, and superstars surprised with the slime of their lives, this year's Kids' Choice Awards is like nothing else seen on TV!

Featuring slime-tastic surprises, Kids' Choice Awards will honour the biggest celebrities from the worlds of film, music, and television and give kids a front-row seat to SLIME, stunts and celebrities.

Aussie kids will not only get to vote for global nominees, but also for their favourite Australian celebrities that they deem worthy of a coveted orange blimp.

Take a nostalgic trip down memory lane with your favourite football head and his friends as they go on the wildest adventure in the brand new Hey Arnold! The Jungle Movie.

Hey Arnold!: The Jungle Movie picks up where the original series ended in 2004, resolving unanswered questions and plotlines, when Arnold and his friends go on the field trip of a lifetime: action-packed and full of exploration!

Join Arnold as he tries to achieve his ultimate dream and finally find his missing parents. It all starts when Arnold and his classmates take a trip to San Lorenzo, Central America, which is the last place Arnold's parents were seen. Their trip takes a turn when pirates kidnap Arnold and his friends! As the leader of the journey, Arnold must make sure his friends are safe, all while working towards a reunion he's dreamt of his whole life.

Talented dancer, singer and actress JoJo Siwa will star in this half-hour special as she recounts all the experiences in her life that led up to her biggest moment ever – officially becoming a Nickelodeon star and performing for her fans at the largest shopping centre in the United States, the Mall of America.

During the week of the JoJo Siwa: My World special, JoJo will share her favourite Nick shows with episodes featuring celebs such as Maddie Ziegler, Emma Stone and One Direction, on weekdays at 5pm. Special episodes of shows include The Thundermans, Nicky, Ricky, Dicky & Dawn, iCarly, Game Shakers and School of Rock.

Henry Danger and the Game Shakers
Monday 26th of March at 4:20pm

This March, the crime-fighting superhero duo from Henry Danger is back with two brand new episodes! Henry, a teen with a secret identity and his offsider Captain Man will face new challenges in this double episode special, featuring a crossover from the team at Game Shakers.

The Game Shakers team is made of two 12-year-old girls launch a super cool gaming company in New York with the profits of their successful school science project. They also have the help of rapper Double G, his son Triple G and friend Hudson.

In the exciting, brand new crossover special with Henry Danger and the Game Shakers, Danger Games, the wicked Dr. Minyak is frustrated by his failed villainy and plans to ruin Double G's worldwide charity concert. Captain Man and Kid Danger must join forces with the Game Shakers to defeat Dr. Minyak and keep Double G safe.