Introducing Download the Weird, the brand new annually-released title in the Ripley's Believe It or Not! series. Behold the cat with two faces! Marvel at the ball gown made entirely from human hair! And meet a real-life Lizardman!

For the legions of dedicated Ripley's fans, and anyone else on the planet who loves the unbelievable, the latest annual in the bestselling series is a feast of delights. As well as the jaw-dropping images and strange facts, read intriguing interviews with some of the astounding individuals who feature in the book, and informative Ripley's Research boxes that give the scientific explanation behind some of the most incredible tales. In addition, there is also the brand new Ripley's Weird Records feature.

Featuring full-colour photography throughout plus 100% all new content, never-before-seen stunts, shocking stories and astounding facts, Download the Weird is a treasure trove of the weird and wonderful - and it's all strikingly true!

Ripley's Believe It or Not!, one of the worlds most recognised brands, has been adapted into a wide variety of formats, including radio, television, a chain of 32 museums (including one in Surfer's Paradise), and a book series. The Ripley collection includes 25,000 photographs, 30,000 artifacts and more than 100,000 cartoon panels. A movie of the life of Robert Ripley is also in active development. Published in Australia by Ice Water Press, Ripley's Believe It or Not! Download the Weird ($39.95) is now available at all good book stores. 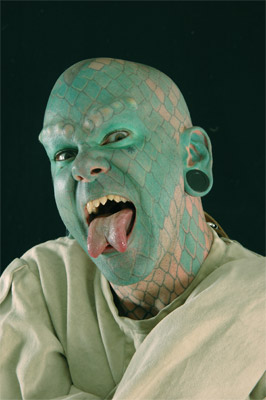 Interview with Erik 'The Lizardman' Sprague

Question: What do you do for a living?

Lizard Man: I am an artist and an entertainer. I make my living performing around the world. My show typically consists of a mix of stand-up, spoken word, and sideshow stunts. I am also the front man for the band Lizard Skynard.


Question: What's the most challenging stunt, you perform?

Lizard Man: Many of the stunts and acts involve some pain or discomfort even when done correctly and almost all of them are dangerous if not potentially fatal. No one should attempt to mimic or otherwise perform such feats without proper training and instruction.


Question: Can you talk about the procedures you've gone through to become 'The Lizardman'?

Lizard Man: I have undergone an estimated 650-700 hours of tattooing. I have several piercings, of which I currently retain and wear jewellery only in my half-inch diameter septum. Due to a severe reaction I stopped wearing jewellery in my one inch earlobes in February 2009 at which time they were unofficially the strongest pierced lobes in the world having successfully pulled cars on several occasions. I have had five Teflon horns subdermally implanted above each of my eyes to form horned ridges. Four of my teeth have been filed into sharp fangs. And my tongue has been bifurcated.

I have not kept an accurate record of the cost, as it is not a central issue to me. I have been fortunate in that much of the work has been done free or at reduced cost. An estimated cost / value for all of the work done at full price would be close to $250,000.

I have been actively getting work done since 1994. My work and travel schedule greatly restricts how much time I can spend getting procedures and healing but the progress continues.


Question: What inspired your transformation?

Lizard Man: I felt I should choose something that would work well for a total body theme (fit all areas, age well) and, even more importantly, something I would like for the rest of my life. After considering several options (mazes, stories, spots, stripes) I settled on the reptilian theme because I liked the look and it made a good fit with other ideas I had for the future at the time; like my split tongue and teeth, which did come to pass.