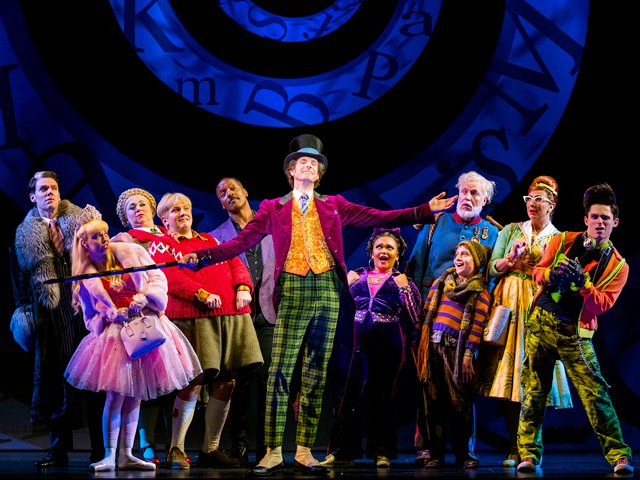 The spectacular new musical Roald Dahl's Charlie and the Chocolate Factory has arrived in Australia, playing in Sydney at the Capitol Theatre until 21 July 2019. The production moves to Melbourne's Her Majesty's Theatre from 9 August, then to the Lyric Theatre, Brisbane from March 2020.

Four boys share the role of Charlie Bucket in Sydney in this delicious tale, Oliver Alkhair (11 years of age, from Panania), Tommy Blair (11, Engadine), Xion Jarvis (9, Burwood Heights) and Ryan Yeates (13, Canada Bay). Charlie lives with his mother and his four grandparents in a little wooden house near a great town, and is the final child to find a Golden Ticket.

Willy Wonka, the most amazing, fantastic, extraordinary chocolate maker the world has ever seen, is played by Paul Slade Smith. Slade Smith was part of the original Broadway cast of Charlie and the Chocolate Factory, appearing as Grandpa George, and most recently appeared in the Broadway revival of My Fair Lady at Lincoln Center.

Ninety and a half year old Grandpa Joe, an enthusiastic storyteller and eternal optimist, is played by Australian show business royalty Tony Sheldon. Sheldon is best known for playing the role of Bernadette in Priscilla, Queen of the Desert for over 1,900 performances in Australia, New Zealand, London, Toronto and on Broadway, winning the Theatre World Award and nominations for the Tony Award as Best Actor in a Musical, the Drama Desk Award, the Drama League Award and the Outer Critics Circle Award. In the role of Mrs Bucket, a kind, caring mother and a woman of few words, is Lucy Maunder. Most recently Lucy played songwriter Cynthia Weil in Beautiful: The Carole King Musical, and prior to that toured New Zealand, Adelaide and Perth in Matilda: The Musical, in which she played Miss Honey and was nominated for a Helpmann Award. For the Gordon Frost Organisation, Lucy played Lara in Dr Zhivago and Rizzo in Grease.

Producers John Frost, Craig Donnell, Warner Bros Theatre Ventures, Langley Park Productions and Neal Street Productions are thrilled with their talented cast. "We have found such a gloriously talented bunch of performers to create Charlie and the Chocolate Factory for Australia," they said. "The world fell in love with Roald Dahl's bewitching tale when the book was released, then filmgoers adored the 1971 film with Gene Wilder. Now this fabulous cast is enchanting audiences with the story once again on stage."

"This is such a wonderful story for generations to share," added John Frost. "Parents love sharing their favourite Willy Wonka film from their childhood with the whole family, and grandparents love taking their grandkids. We have an amazing cast to bring this story to life."

The Australian premiere has been secured for Sydney by the NSW Government's tourism and major events agency, Destination NSW, and will be a major drawcard for visitors to the State.

Step inside a world of pure imagination. Roald Dahl's Charlie and the Chocolate Factory is the perfect recipe for a delectable treat: songs from the original film including "Pure Imagination", "The Candy Man" and "I've Got a Golden Ticket", alongside a toe-tapping and ear-tickling new score from the songwriters of Hairspray.

Charlie and the Chocolate Factory is perhaps Roald Dahl's best-known story and has proved to be one of the most enduring children's books of all time. The story of Charlie Bucket, the five Golden Tickets, the Oompa-Loompas and the amazing Willy Wonka has become firmly embedded in our culture since it was first published in 1964. Conservative estimates suggest the original book has sold over 20 million copies worldwide; it is now available in 61 languages.

Roald Dahl began working on Charlie and the Chocolate Factory in 1961, but its origins can be traced all the way back to Dahl's own childhood. In his autobiography, Boy, he tells us how, while at school in England, he and his fellow Repton students were engaged as 'taste testers' for a chocolate company - something that seems to have started him thinking about chocolate factories and inventing rooms long before Mr Wonka was on the scene. But when he came to write Charlie and the Chocolate Factory, the story went through several drafts until the story as we now know it was released in 1964.

Now it's Australia's chance to experience the wonders of Wonka like never before - get ready for the Oompa-Loompas, incredible inventions, the great glass elevator and more, more, more at this everlasting showstopper!