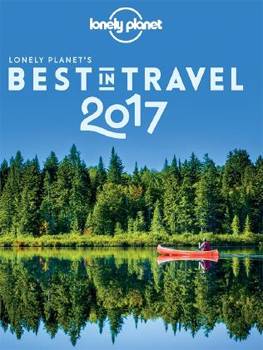 Global travel authority Lonely Planet has chosen South Australia as one of the world's Top 10 Regions for next year in Lonely Planet's Best in Travel 2017, released this evening.

South Australia is ranked fifth on the book's list of Top 10 Regions 2017.

'Its climate may be hot, but South Australia offers the coolest mix of brilliant wine country, abundant produce festivals, stark and stunning tracts of picturesque Aussie outback and crowd-free beaches that could make even the Bahamas jealous," writes Lonely Planet's Chris Zeiher. 'The Queen Mary 2 is putting South Australia on her travel list in 2017, choosing to dock not only in its artistic capital, Adelaide, but also taking in the rustic charms of Kangaroo Island. South Australia is a delicious feast suitable to anyone's taste."

Lonely Planet has teamed up with Snapchat to create an exclusive Best in Travel 2017 live story, where users can submit their snaps from the top 5 regions. For the first time, Snapchat users in South Australia can share their experiences of the Best in Travel 2017-winning region with the rest of the globe.

Australian destinations and attractions are also featured on a number of the book's other top lists for 2017, including:

Best Value Destinations
9) Bellarine Peninsula, Victoria: 'The Bellarine Peninsula has been a destination of choice for Melburnians looking for a laid-back (read: sleepy) escape from the city for generations. But now this part of Victoria has some tasty-looking attractions to go with its timeless beaches and historic towns like Queenscliff and Portarlington. Jack Rabbit Vineyard and Flying Brick Cider Co are two of the newer destinations attracting attention, along with a rail trail for cycling, rock pooling, snorkelling and surfing."

Family Adventure Destinations
7) Southwestern Australia: 'Do your kids have their heads in the clouds? Treat them to a 600m-long treetop walk in the Valley of the Giants. Or do they prefer to go underground? Check out the fascinating caves in the Margaret River region. Is wildlife their thing? Go whale watching in Geographe Bay. Beach combing? Bike riding? Tree climbing? You've guessed it…"

Top Five Travel Trend: The World is Your Office - 10 of the Best Workspaces Worldwide
Kindred Studios, Melbourne, Victoria: 'Not just a workspace but also has studios, a bar and yoga classes."

Lonely Planet's writers and experts spend time on the road in almost every destination on the planet, and each year they report which destinations are set to take off, offering travellers the best experience available. The destinations selected for Best in Travel meet specific criteria. It could be that something special is going on in the year ahead, or there's been recent development and a lot of buzz about the place; that it offers travellers new things to see or do; or that the Lonely Planet team of experts thinks it's been overlooked and underrated and suggests travellers visit before the crowds do.

Deciding what to include in Lonely Planet's Best in Travel annual selection is a considered process involving the whole of Lonely Planet's community: from its writers and editors all the way to its online family of bloggers and tweeters. Each year, they come up with hundreds of places that are not to be missed. These are then whittled down by a panel of in-house travel experts who shortlist in line with criteria such as topicality, excitement and wow-factor.

Travel media company Lonely Planet is the world's leading guidebook publisher, providing inspiring and trustworthy information for every kind of traveller since 1973. Over the past four decades, Lonely Planet has cultivated a dedicated traveller community and printed more than 139 million books across 14 different languages to most destinations on the planet. The Lonely Planet ecosystem also includes digital and mobile apps, a comprehensive ebook portfolio, 12 international magazines and an award-winning website. Visit us at lonelyplanet.com, and join us on Facebook (facebook.com/lonelyplanet), Twitter (@lonelyplanet and #lp) and Instagram (instagram.com/lonelyplanet).