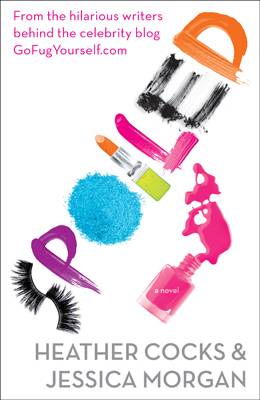 Sixteen-year-old Molly Dix has just discovered that her biological father is Brick Berlin, world-famous movie star and red-carpet regular. Intrigued (and a little terrified) by her Hollywood lineage, Molly moves to Los Angeles and plunges headfirst into the deep end of Beverly Hills celebrity life. Just as Molly thinks her life couldn't get any stranger, she meets Brooke Berlin, her gorgeous, spoiled half sister, who welcomes Molly to La-La Land with a smothering dose of "sisterly love" ... but in this town, nothing is ever what it seems.

Set against a world of Red Bull-fuelled stylists, tiny tanned girls, popped-collar guys, and Blackberry-wielding publicists, Spoiled is obsessively readable and great fun ... unless you are famous.

Jessica Morgan and Heather Cocks are Los Angeles fashion writers and the founders of GoFugYourself.com , which draws an average of four million readers a month and has been called one of the "Most Powerful Blogs in the World" by InStyle UK, in addition to being ranked #13 on its list of the best online fashion blogs. GoFugYourself is also ranked #36 on Technorati's "100 Biggest Blogs". The blog has been included in top web lists for Time.com, Entertainment Weekly, The Sunday Times, and The Guardian, and has been featured in top US and international newspapers and magazines.

Heather and Jessica have appeared on the TV Guide Channel, E!, Oxygen, and the BBC. They have a large media presence in Australia, having been featured in Girlfriend magazine, The Canberra Times, Grazia Australia, and CLEO; over 160,000 Australians visit their site each month.

Question: What inspired you to write Spoiled?

Jessica Morgan: Heather and I thought it would be fun to explore what it would be like to be the child of the sort of celebs we write about on Go Fug Yourself -- both someone who grew up in that world, and someone who was thrust into it. It's so different from what most people experienced, and we wanted to explore both the fun, wish-fulfillment side, and the part that might be harder.

Heather Cocks: We liked thinking about the fact that people's basic problems are universal, even if their circumstances are unusual. The emotions they feel at that age are essentially the same. I think that's one reason YA is so popular. In life, we haven't all lost a parent, or had a baby, or struggled with fertility, or lost a job. But we were all that age, and so we've all been where Molly and Brooke are, emotionally and developmentally, even if we weren't physically in Brick Berlin's Bel Air mansion. We've all been the new kid somewhere - high school, a job, college, whatever -- and we've all had crushes, we've all had times where we felt lost, we've felt overlooked, we've all found ourselves wondering what to do to fit in someplace. Those emotions are fun to tap into. Also, we love to read, and we love Young Adult as a genre -- there's so much intelligent writing out there revolving around teen protagonists. It's such a mistake if people write off YA as kid fiction. It's not, at all.


Question: How did you go about working on a book, as a joint project?

Jessica Morgan: It wasn't that tough - we have worked together, and written together, for so long that I think it would have felt more unnatural to do it any other way. But basically, in order to stay organized, we made a very, very detailed outline and worked from that, faithfully. That way, you always know more or less what the other person is working on. We're not going to trade pages to see that someone's been killed off.

Heather Cocks: We were on such a tight deadline, too, that for our first draft we often had to work concurrently. If I was working on a chapter, Jess had to be able to write the next chapter knowing roughly where she was picking up from, and making sure we didn't duplicate any emotional or plot beats. People often think that two people means you're each doing half as much work, but in fact, it means we're writing the whole book twice. We each draft a chapter, we trade, we work through each other's chapters, then we marry them, then we each have to read over the whole thing, and we confer on tweaks. So it was a very involved process, but despite how I just made it sound, it was very efficient. It was great to know that Jess wasn't sitting around twiddling her thumbs waiting for me to hurry up and turn over a chapter to her.


Question: Can you talk about the main differences of writing Spoiled compared you're your blog?

Jessica Morgan: Well, Spoiled is fiction, whereas the blog, obviously, is based in reality - what real people are really wearing. So with Go Fug Yourself, we always have something to react to, and something to jump off from. With fiction, you have to just make it up, which can be harder. Also, of course, it's a much longer form exercise.

Heather Cocks: We also don't tweak each other's work on the blog - I'm a fan of Jessica just as much as the next person, so I always like to see what she's going to say, and don't interfere in that. Whereas this was very much a marriage of both our voices and perspectives.


Question: Is it true that Spoiled will have a sequel?

Jessica Morgan: Yes! In a sense, anyway - it's a continuation of the story. It's called Messy.

Heather Cocks: We're very excited about it. It was sort of an unusual way to pick up the thread, but it was a fun one to write. Spoiler: one narrator is different.


Question: When writing Spoiled, what audience did you have in mind?

Jessica Morgan: Smart, savvy youth - and the young-at-heart, since a lot of adults read YA nowadays. We hope everyone thinks it's funny!

Heather Cocks: Anyone who would read it and not want to throw it back at my head, primarily. We really wanted the target young adult audience to like it, because they are tough customers, but we also desperately hoped our Web site readers would enjoy it, too. They've been so loyal to us, and we wanted to do them proud.