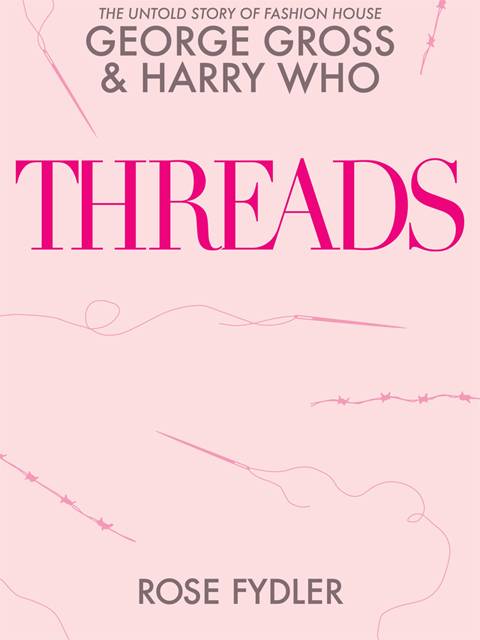 The truth behind the extraordinary life of Australian fashion icon George Gross has been revealed in a riveting new biography.

THREADS - The Untold Story of Fashion House George Gross & Harry Who is heart-wrenching at times and yet filled with glitter, gossip and hilarious anecdotes from the world of haute couture and celebrity Australia.

The biography was written by author and journalist Rose Fydler, after more than 50 interviews with George and the key people in his life.

The book reveals the rags to riches rise of the designing wunderkind, who sketched his first dress at age five after being inspired by screen siren Rita Hayworth.

It recounts his childhood as a Hungarian Holocaust survivor, his family's heart-breaking flight from war-torn Europe to Australia, and the chance meeting with Harry Watt (later known as Harry Who) that changed his life.

The book follows George and Harry's "secret" and enduring love affair, which they have never before spoken about in any detail. As Fydler relates: "George felt punched in the stomach, deprived of oxygen, and would later recall the sensation as an out-of-body experience. Love at first sight."

Also spelled out in fascinating detail is George's rise to the top of the fashion world and the stellar forty-year career that saw the label George Gross & Harry Who worn by some of the world's most famous women, from Princess Diana to Joan Collins and, closer to home, Kerri–Anne Kennerley and Adriana Xenides.

"It was never just about selling frocks – once, in response to rudeness, he set fire to an expensive dress in front of a client, who ran screaming out of the store as it turned to ash," says Fydler. "George did it his way. His journey from penniless immigrant to the top of the fashion industry is a truly inspiring Australian success story".

The book contains photographs from Gross's personal collection, as well as a selection of hand-drawn dress designs.

Rose Fydler is one of Australia's most experienced magazine journalists, writing for a wide range of top publications including Vogue, Australian Women's Weekly, Inside Sport, New Idea and Woman's Day. Her 30-year career includes covering Olivia Newton-John's trek on the Great Wall of China and celebrity weddings around the world. This is Rose's third book.

Question: What inspired you to write THREADS?

Rose Fydler: Looking back, I wasn't so much inspired as compelled. Like many other Australian women, I'd been a long-time customer of George Gross and Harry Who, loving that I could rely on the labels for beautifully-cut "forever" pieces, including a wedding dress (a hot frock that still gets compliments 20 years later when it comes out at black tie events.) I'd always assumed they'd be part of the fabric of my life and knew the shock shutdown of their business in 2014 would carve a big hole in my wardrobe. It made me sad.

Apart from that personal impact, as a journalist I was left with a bunch of unanswered questions. The press coverage only went so deep and I wanted to know more… who were these incredible designers, really? What was their personal relationship (rarely talked about publicly), and how did they build an iconic four-decade always-big-selling fashion brand from scratch? Certainly no easy accomplishment in that industry.

George's background was also a mystery. When his twin sister Kathy (the third partner in the business) confided to me a few details about their traumatic childhood as Hungarian Holocaust survivors, that was the clincher. I got goose bumps – the story was raw and untouched, and I knew immediately I wanted to tell it.


Question: Can you talk us through the research you conducted prior to writing THREADS?

Rose Fydler: In the first eighteen months I made multiple pre-planned trips to Adelaide to interview George and Harry together, as well as George on his own. These trips were usually three days long, with as many interview times booked as possible of usually 2-3 hours duration. I also interviewed Kathy Gross in person 2 or 3 times a month over that same period. All interviews were taped, uploaded to cloud storage, transcribed, and bound chronologically into "research" books that helped me plot the timeline and write the story.

In November 2014, with George and Kathy's permission, I travelled to Budapest, Hungary, to interview their cousin. Marika, being six years older, knew exactly how she, the twins and their late grandparents had survived WW2, and also what happened to individual family members then and since. Her memory proved faultless, and she also allowed me access to her photographs. As Marika spoke no English, I engaged a Hungarian translator to sit in on the three days of taped interviews.

George had felt uncomfortable at first talking about his background – "no one will be interested" – but as soon as we were a few hours in he relaxed, and the memories – both painful and precious – came flooding back. He would sit staring into space, a cigarette in hand, as we talked. After our first conversations George told me he'd begun dreaming about his life in Hungary, something that had never happened before.

What I loved about interviewing him, and also Harry and Kathy, is that no subject was off limits, and every question was answered with complete honesty. The extent of detail was striking. Often when George was speaking I would find myself checking my tape recorder to ensure it was working because what I was hearing – even the fashion industry gossip – was so astounding.

As well as George, Harry, Kathy and Marika, I also interviewed multiple GGHW former staff members, fellow designers and other luminaries from the fashion industry, to cross check facts and further flesh out the portraits of the protagonists.


Question: How long has THREADS been in the making?

Rose Fydler: The book took me three years from start to finish, interrupted in the middle by a five month stint in Florence, Italy, with my family. In retrospect, this holiday revitalised me and set me up for the writing period which I found a gruelling and solitary process.


Question: What do you hope readers take from THREADS?

Rose Fydler: After reading this unbelievable but true rags to riches story, I hope the reader will walk away with even more admiration for the fashion house. They will feel inspired by the designers' story. Particularly George – showing genius level talent as a 5-year-old and going on, despite a tough and tragic childhood, to reach the top of his chosen profession – is an Australian made triumph. Success was not handed to him on a silver platter – it took sheer guts, determination, and hard work, with that wonderful talent sprinkled in.


Question: Can you tell us about the hand-drawn dress designs, included in THREADS?

Rose Fydler: By the age of 5, George the gifted artist was already designing clothing by hand. He only had to see fabric for it to spark an original idea, and his sister Kathy remained his lifelong muse. Every one of his collections over forty years started with him putting pen to paper.

Rose Fydler: Because I put everything into the research and writing of this book, Threads has consumed my life! Other ideas have stayed on the backburner up until now, but at this moment am tossing around thoughts on a fourth book – probably fiction.