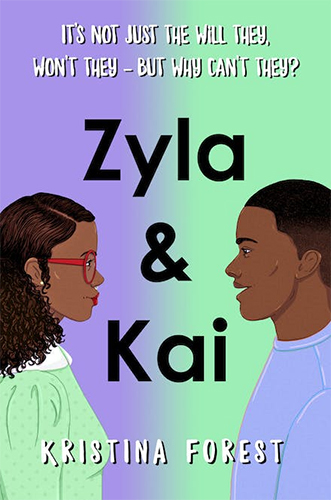 Zyla & Kai follows two teens - one a hopeless romantic and the other a cynic - who, over the course of a year, fall in love, break up, then mysteriously run away together.

A fresh new YA romance novel by Kristina Forest, Zyla & Kai is an epic star-crossed love story about first love and not just the will they, won't they - but why can't they?

While on a school trip to the Poconos Mountains, Zyla and Kai run away together, leaving their friends and family confused. As far as everyone knows, they've been broken up for months.

And honestly? Their break-up hadn't surprised anyone. Zyla, a cynic about love, met Kai, a hopeless romantic, while working together at an amusement park the previous summer, and they couldn't have been more different.

Alternating between the past and present, we see the love story unfold from Zyla and Kai's perspectives: how they first became the unlikeliest of friends over the summer, how they fell in love during the school year, and why they ultimately broke up. Or did they?