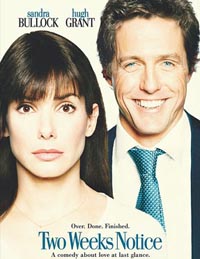 Synopsis: Millionaire George Wade doesn't make a move without Lucy Kelson, his multi-tasking Chief Counsel at the Wade Corporation. Lucy meanwhile, has an ulcer and doesn't get much sleep.

It's not the job that's getting to her. It's George. Charming but utterly self-absorbed, he treats his star legal gun more like a maid than a Harvard-trained lawyer, and is completely dependent on her for the simplest of tasks. Now, after five years of unreasonable requests and endless fussing, Lucy Kelson is giving her two weeks notice.

George instantly makes it difficult for Lucy to leave the Wade Corporation, throwing obstacle after obstacle in her way. Finally, he agrees to let her go, but only if she finds her own replacement.

After a challenging search, Lucy hires an ambitious young lawyer with an obvious eye on her wealthy new boss. Lucy grooms her protege for the role of George's caretaker and before long, she is free of his ridiculous demands.

Ready to change course, Lucy prepares to join her devoted boyfriend on an adventure at sea. Meanwhile, George is coming to terms with the fact he may need her a lot more than even he thought. Is it too late to reneg on the deal they've both made?