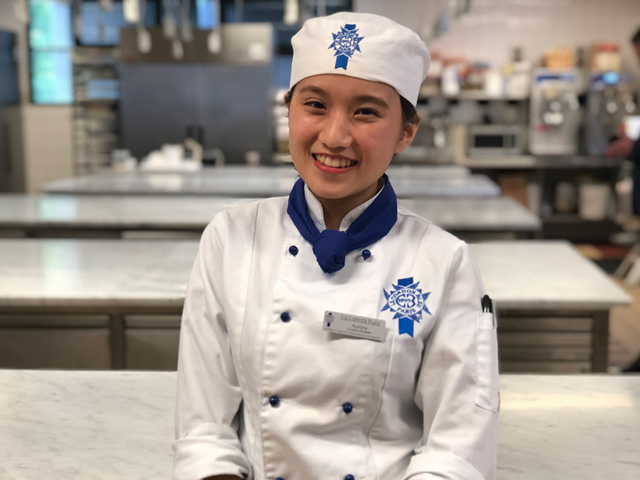 Aurora Hsu has always dreamt of becoming a pastry chef and after moving from Taiwan to Queensland's Gold Coast at the age of 14, she was delighted to discover that Australians took their bakeries as seriously as she did.

Now she is living out her patisserie dreams as one of the first applicants of Le Cordon Bleu Brisbane, set to graduate from the prestigious cooking school in 2021, and already has her sights set on working in Paris.

"Paris is my dream and my Le Cordon Bleu qualification is going to fast-track me there," says Aurora.

"We always cook traditional Asian food in my home but ever since I became determined to be a pastry chef, I take over the kitchen baking my cakes and pastries for the whole family. They don't complain!"

So strong was her newfound passion that 14-year-old Aurora persuaded her parents to travel with her to the Le Cordon Bleu school in Sydney to gauge where her interests might take her. She knew then and there she had found a pathway to an exciting career.

Five years later she has become one of Le Cordon Bleu Brisbane's first applicants, and is now inching closer to the finish line of her Advanced Diploma of Hospitality Management (Patisserie), eyeing off the ultimate next step; working abroad.

"During the interview process with prospective students, we talk about the experience they've had, their education and what their career goals are.

"With Aurora it was very evident she was passionate about the industry. She spent her last year of high school studying a Certificate III in Hospitality and she worked at the Commonwealth Games Village on a volunteer basis which sometimes meant waking up at 3/4am for breakfast shifts, so her passion was clear."

"Our qualifications are recognised internationally and the alumni we produce represent an over century-old, prestigious brand steeped in culinary excellence, throughout their entire careers, so it's important that we get the right students. It was clear from an early stage Aurora was a right student. She had strong support from her family too which is also very important."

Not only are Aurora's family extremely supportive of her patisserie studies, she says they have also become eager guinea pigs for her creations.

Aurora could get to Paris sooner than she thinks, as her six-month industry placement is coming up in September, where she will be able to consider different options, says Mr Black.

"We work closely with our industry engagement team to try and match placements with our students' preferences. This may be nationally or internationally."

Aurora has her list of preferences at the ready. "I would love to work for a luxury hotel chain otherwise definitely anywhere in Paris."

So impressive is Aurora's drive that Brisbane City Council invited her to apply for their Student Ambassador Program, to which she was accepted, she excitedly notes.

"Around 350 students apply, and they only take on 40 after a lengthy screening process including three rounds of interviews.

"As a Student Ambassador, I get to show prospective students both international and domestic, what it's like to study in Brisbane through my eyes as a Le Cordon Bleu student."

Mr Black isn't surprised that Aurora was given the honour of this responsibility stating, "the passion that Aurora has, as well as her natural talent combined with a Le Cordon Bleu qualification, will really ensure that she has a successful and rewarding career in patisserie. She will be an asset to any company that she joins or even her own, one day."

Fittingly, that's another dream on Aurora's to-do list she adds: "I definitely want to open my own bakery-in Paris!"

Applications are currently being accepted for the institute's July and October intakes.
For more information about Le Cordon Bleu and to book a tour of the new Brisbane campus, visit: https://www.cordonbleu.edu/brisbane/home/en 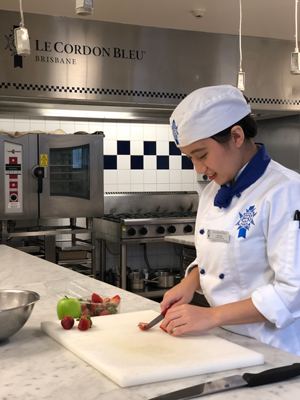 Question: What originally inspired you to study at Le Cordon Bleu Brisbane?

Aurora Hsu: My passion for patisserie started at a young age – I knew I wanted to pursue it professionally later in life. Le Cordon Bleu is known for being the best cooking school in the world and I was determined to learn from the best. When I was 15, my parents and I travelled down to Sydney from Gold Coast to visit the Le Cordon Bleu campus and explore my future studying options. We learned then that a Brisbane campus was opening in 2018 and my parents and I were ecstatic as it was closer to home.


Question: What's a typical day like for you at Le Cordon Bleu Brisbane?

Aurora Hsu: Well it depends on the day, so my classes run from Monday to Wednesday. On Mondays and Tuesdays, my timetable follows the structure of Theory class, Demo, and then Practical class. On Wednesdays, it's just Demo and Prac. So on Mondays and Tuesdays I would put on my Theory Class uniform and attend the Theory session to learn about what we're going to attempt to make in the day, and then I have a break where I change into my Practical Lesson uniform. After break I attend a Demo class where the teaching chef will demonstrate to us how to cook the food we're making and then we have a break again and after that we go into Prac class trying to recreate what the chef showed us before. Every day starts at a different time, Mondays I start at 9am and finish at 5:30pm, Tuesdays are 11:30am to 9:30pm, and Wednesdays are 11am-6:30pm.


Question: How does it feel to be selected to represent Brisbane City for its Student Ambassador Program?

Aurora Hsu: I feel very lucky to have been accepted into such a great program! I take great pride in being a Le Cordon Bleu student and I want other students with similar dreams to see first-hand the great experience that is studying at Le Cordon Bleu, through my eyes as a student ambassador. The pathways a Le Cordon Bleu qualification provides into the hospitality industry are endless.


Question: What originally inspired your passion for baking?

Aurora Hsu: My mum was always constantly cooking back in Taiwan and reading cookbooks. One day she asked me if I wanted to make doughnuts with her. It was such a great day for me because not only did the doughnuts turn out so well, I got to make different shapes and sizes and it was just such an exciting experience. I was 6 or 7 at that time and ever since I just got hooked onto bakery/pastry food.


Question: Can you share your earliest kitchen memory, with us?

Aurora Hsu: I'm not sure if it is the earliest but ever since the doughnut day, that's the earliest experience I can remember because it was just so great it probably, wiped out every other memory I had of being in the kitchen before then.


Question: What five ingredients could you not live without?

Aurora Hsu: In terms of bakery/pastry I absolutely need flour, eggs, sugar, milk, and butter. That's just the basics, there are still other ingredients I need to make it taste good. In terms of my day to day life I cannot live without rice, cheese, soy sauce, garlic, and kimchi.


Question: Where do you find inspiration when creating desserts?

Aurora Hsu: In my spare time I trawl Instagram looking at desserts just because I love looking at other people's works but at times I get inspired and think to myself "What if I did this but I change it this way and make it that way?" I also like to look through Pinterest as well.


Question: Can you share your future career goals, with us?

Aurora Hsu: I would love to work in Paris in a famous bakery or a luxury hotel chain. I also want to open my own bakery one day and if that happens to be in Paris also, then that's a great bonus!