The Bridesmaid From Hell 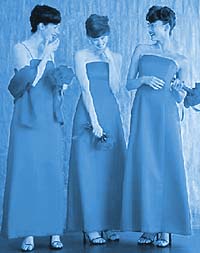 THE BRIDESMAID FROM HELL!!!

Recently we were asked to attend a friend of a friend's wedding. There were some last minute cancellations and seats needed to be filled. Weddings are always a bit of fun, so we took up the offer (we had nothing else to do that Saturday), frocked up and went along. We could tell much preparation and thought went into the day and all bases had been covered, so to speak. Except there was one little glitch on the day and one rather unexpected string of events which would cause some people extreme embarrassment. Although for others (like ourselves) it brought us some comedy relief for the afternoon.

The glitch in question was a rather nightmarish and colourful BRIDESMAID FROM HELL, whom proceeded to upstage the bride any chance she could get. Typically the role of a bridesmaid is to be a support to the bride, to tend to the bride's needs and to make sure the lady of the moment has a wonderful and memorable wedding day. Although on this occasion, this particular wedding was memorable for all of the wrong reasons.

It began with the arrival of the bride and her attendants. As the bride stepped out of her car, all but one bridesmaid rushed to her aid to straighten her veil and rearrange her dress. The "stray" bridesmaid seemed more interested in posing for photographs, waving to her boyfriend and checking her lipstick. Strike one! The bride looked less than impressed.

Then as the guests made their way in to the church to await the entrance of the bridal party, the "wandering" bridesmaid stopped and had a conversation with many of the guests. This caused the procession to be halted and the bridal march to be well and truly over before the bride even reached the altar. Strike two! If looks could kill...

The ceremony appeared to be going well until the "daft" bridesmaid's sneezing fit drowned out the exchange of the wedding vows, prompting undesired giggles and sighs from the congregation. Strike three! The fun was just beginning and we hadn't even reached the reception!

The remainder of the service went off without a hitch until the throwing of the congratulatory rose petals in the gardens of the church. The "said" bridesmaid in all her excitement, got hold of a whole bag of rose petals with which she intended to stuff down the brides bustier. But missing her mark (well and truly) the bride ended up with a thump on the chin, resulting in an unsightly bruise instead. Strike four! If the bride were a witch, she'd make the wicked witch from The Wizard of Oz, proud.

Now we should point out to you at this stage we were wondering what else could possibly go wrong and were a bit taken aback at the antics of this bridesmaid. We thought for sure, we were either in a Hollywood movie or starring in Candid Camera. Surely someone couldn't possibly be this uncoordinated and be so lacking of decorum especially in the midst of a wedding photo shoot.

Shall we set the scene for you? Gorgeous sunny day, blue skies, a beautiful park by the beach; an ideal location really for a very becoming bridal party to have their "official" photos taken. This was not to be the case as the "troublemaker" bridesmaid continued to run a-muck and ruin just about every photo with her ridiculous behaviour. More content to play with the groomsmen rather than attend to the bride, the look of horror was evident on the faces of all present. It was becoming apparent that this bridesmaid is "the one" that all those wedding magazines warn you about! Strike five! Do not EVER have a bridesmaid like this at your wedding.

"She" got progressively worse as the afternoon wore on. The reception saw this "upstart" not only drink too much champagne, crash the bridal waltz and trip over the bride's train but also when making her obligatory speech, she dedicated it to herself and all that she had been through rather than talking fondly of the bride. Strike six! The Father of the bride discreetly escorted the "unruly" bridesmaid to one side and proceeded to reprimand her. Let's just say she was quiet from this point on and we were all able to enjoy the remainder of the festivities.

But there was one last surprise to be had. Conveniently forgetting that shaving cream can peel the paint off some cars, the now "spiteful" bridesmaid decided to graffiti obscenities all over the going away car. Charming hey? We think it may have been a case of her being "always the bridesmaid but never the bride", as it was revealed to us upon our departure that she had just been dumped by her third fiancé.

It was certainly an eventful wedding, to say the least, although not necessarily one that the bride and groom will remember warmly. So a warning to all prospective brides and their partners: choose your bridesmaids wisely! Don't just pick them because they picked you. A wedding is supposed to be a magical day and the last thing any bride needs is to be upstaged, hit or tripped by her bridesmaid. Beware the bridesmaid from hell; she DOES exist and WE saw her!