Joaquin Phoenix Is PETA's 2019 Person Of The Year 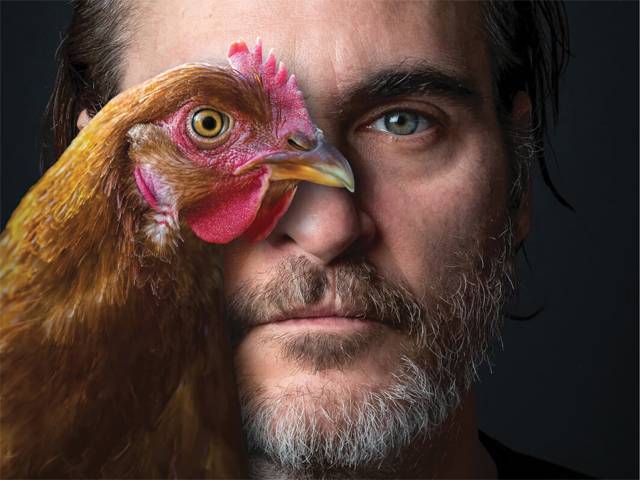 Oscar Frontrunner Wins for Turning the Spotlight on Animals in Trouble

There's no stopping Joaquin Phoenix's dedication to animal rights – which is one reason the Joker star has been named PETA's 2019 Person of the Year. A vegan since the age of 3, when he saw a fish caught and killed, Phoenix joins past winners including live-export whistle-blower Faisal Ullah.

In just the last year, Phoenix appeared on PETA US "We Are All Animals" billboards in New York's Times Square and on Los Angeles' Sunset Boulevard, joined California lawmakers to announce legislation banning travelling wild-animal circuses, and cradled a dead chicken as he led a memorial service at a National Animal Rights Day march. He's the executive producer of The Animal People, a documentary that follows animal rights activists who were suppressed by powerful industry interests and who comforted pigs with a drink of water at their last stop before entering a Los Angeles abattoir. "I don't want to cause pain to another living, empathetic creature," he explained during his Joker media tour. "I don't want to take [their] babies away from [them]. I don't want to force [them] to be indoors and fattened up just to be slaughtered. It is absurd and barbaric."

"Joaquin Phoenix never misses an opportunity to turn the spotlight away from himself and onto animals' plight and to set a great example of walking the vegan walk," says PETA founder Ingrid Newkirk. "PETA is proud to kick off awards season by honouring his dedication to showing everyone that when it comes to feeling fear, pain, and love, a human is no different from a hen or a hamster."

Phoenix narrated the groundbreaking animal rights documentary Earthlings in 2005 and presented the director, Shaun Monson, with the first-ever River Phoenix Humanitarian Award at PETA US' 35th Anniversary Gala in 2015. He produced the pro-vegan documentary What the Health in 2017 and was among the narrators of the animal agriculture exposé Dominion in 2018. His decades-long partnership with PETA and its international affiliates includes campaigns against the wool (2016), dog-leather (2015), exotic-skins (2010), fishing (2013), and turkey (1998) industries, among others.

PETA – whose motto reads, "Animals are not ours to experiment on, eat, wear, use for entertainment, or abuse in any other way" – opposes speciesism, which is a human-supremacist worldview.