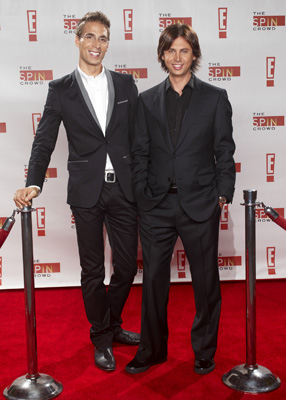 Nobody knows how to make stars shine brighter or fan the flames of celebrity more than a Hollywood publicist, but the job comes with its fair share of drama too. From red carpet meltdowns to nightmare event logistics and behind-the-scenes blow ups, PR guru Jonathan Cheban has seen it all. Now, he's taking his New York-based business bicoastal and aims to conquer the Hollywood celebrity scene, assisted by his affable lieutenant Simon Huck and the group of publicists that make up Command PR. All the excitement, fun and foibles of life on the Red Carpet are played out in this new reality series. The Spin Crowd, is the first offering from executive producer Kim Kardashian.

In the premiere episode, now that Jonathan and Simon have Command PR up and running, they must make certain that the staff they have hired is up to the lofty goal they have set for themselves ... complete and total domination of the L.A. celebrity publicity scene. Their first objective is to take on a campaign with popular TV host Mario Lopez. When Jonathan decides that plain-Jane Erika does not look the part of a Hollywood publicist, he orders a smart and savvy new look that befits her new station. However, when he demands lip injections for a fuller pout, Jonathan might have crossed the line.

Throughout the eight half-hour episodes, E! pulls back the velvet rope to show viewers what it's like inside the manic world of A-List celebrity publicity, including all the excitement, histrionics and laughter generated by the Command PR team. Jonathan and Simon are quite the 21st century odd couple, not only working together, but also becoming roommates. The neat and stylish Simon moves into Jonathan's home and quickly realises the piles of dirty dishes, stacks of leftover pizza boxes, and midnight wake-up calls to discuss Jonathan's next big idea for a client are more than he bargained for.

Viewers can look forward to seeing how star makers Jonathan and Simon work with celebrities to build and spin their reputations to dramatic new heights. During the season, Kim Kardashian asks Jonathan to put on a last minute charity event in Times Square for the Dian Fossey Gorilla Fund International. Kelly Osbourne asks the PR gurus to pull together a charity event that is so compelling Jonathan decides to waive his fee to make it - and Kelly - a success. Sultry Carmen Electra proves to be a demanding client who believes only the best PR team can handle the launch of her line of romance products. She hires Simon and Jonathan to make it happen, and expects it to happen BIG. The series will also feature Khloe Kardashian Odom, Sophie Monk, Travis McCoy, Pete Wentz, Stephanie Pratt and many others.

Tune in for all the hilarious hoopla and diva worthy drama that goes on behind the closed doors of the hot publicity power house Command PR when The Spin Crowd premieres only on E! 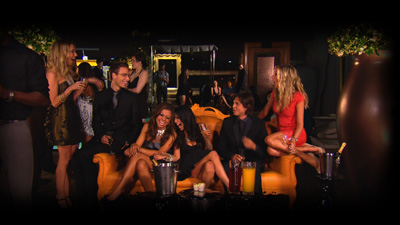 Question: Who originally came up with the idea for The Spin Crowd and what made you decide to start filming the show?

Jonathan Cheban: Simon and I appear on lots of Keeping up with the Kardashians and Khloe and Kourtney Take Miami episodes and Kim Kardashian got such a good response from the shows that she decided that we should do a show together. We decided the only real way to get a real take on a show was to do something that we really do and that is work! The idea came up and it was a long process but it all worked out and people seem to be loving it, thank God!


Question: What is life really like at Command PR is it as crazy as it seems on The Spin Crowd?

Jonathan Cheban: It is actually crazier. The show is cut down to 22 minutes and it's nuts! In LA we have so much going on and some of the girls are still learning and I'm busy between New York and LA and Simon is dealing with all of our clients? its crazy! We have celebrities calling all day and there is this event and that event, the press, the paparazzi, its nuts!


Question: You two have been working with celebrity clients for a long time, did anything change when the cameras arrived to film The Spin Crowd?

Jonathan Cheban: With us, personally, after a week or so of filming you kind of forget that the cameras are there. Everyone was trying to be conservative, of course, when we started filming but after that you are back to normal and you forget that they are there. There are producers watching you, camera and sound guys, but you just let loose!

Jonathan Cheban: There is so much fun stuff that goes on! Here, in America, we are already on episode three and it's so funny and hysterical! I was in hysterics, myself. I know 1000's of people on Twitter were dying over the episode.

We go to New York, we go to Manhattan and then The Hamptons and we follow my personal life. Every episode is so different there is more comedy, drama and romance, it really forms into a solid show and is for everybody as it has a taste of everything from PR to personal, it is a whole mix of things, which is great.

In the second episode it is a whole different type of episode to the first. I feel like episode three is where we really got our groove on and it changes, the show really gets into a high gear because that episode is hysterical, from there it becomes really, really solid. After you're filming for a couple of weeks and the girls are comfortable with the camera, then they tend to deliver more.


Question: Can you talk about how it feels to deal with Hollywood celebrities on a daily basis at Command PR?


Question: What celebrities will we see featured in the first season of The Spin Crowd?

Jonathan Cheban: Mario Lopez stars in the first episode and then Carmen Electra is in one of the episodes so is Pete Wetz and Kim Kardashian makes a couple of appearances. We have lots of people, there are constant celebrities. The show is really fun and you'll get a lot of the personal life, too. It's not just office it definitely takes audiences out of the office.


Question: Can you talk a little bit about working with Australian, Sophie Monk?


Question: How is it having your close friend, Kim Kardashian, as the Executive Producer of The Spin Crowd


Question: What did you enjoy the most when filming season one of The Spin Crowd?

Jonathan Cheban: I just think it's really fun. I love people's reaction I went to the mall with my mum and I these girls were going crazy and screaming "Oh My! I love you!" (Laughing) Its nuts, the show has only been on for two weeks and everywhere I go from old people to young people, mothers and daughters are talking to me and saying "I wanted to say hi!" It's been insane, the response we've had, in just two weeks.


Question: How different is being a guest star on Keeping up with the Kardashians and Khloe and Kourtney Take Miami to having your own show, The Spin Crowd?

Jonathan Cheban: I feel like I have been on television, but The Spin Crowd has taken it to a whole other level it is different to someone that who has actually, just starting their first episode. I am really excited about the show.


Question: Have you watched yourself, on the television, as of yet?

Jonathan Cheban: Yes! It is very weird. I cringe sometimes, sometimes I hate the way I sound, I wonder 'do I really sound like that?' (Laughing) Or there will be a bad angle and I'm thinking 'Oh man! That looks terrible!' The best thing is watching it with a group of people, that are hysterical laughing and then I loosen up and think 'Oh, it is actually funny!' It is weird that people find me funny, I don't get it.

The show isn't just about work you get a taste of how we live. You get a taste of me going to dinner, where we normally go to dinner and go to lunch, you really get a feel of it and that's what I wanted, on the show. I didn't want a fake show, where you go to a restaurant, where you don't eat and they just set it up. I wanted it to be how we live that's really my car, that's really my condo. When the show goes to New York you'll see my condo and you'll really see my life.

Simon, who I'm with all the time, is hysterical, he has been working with me for seven years!


Question: What do you think will appeal to audience of The Spin Crowd the most?

Jonathan Cheban: The audiences get an inside look into Hollywood plus the comedy. I don't think there is really another show like The Spin Crowd, on television, most shows are about love and romance or just strictly business and they worry and say "We didn't get a guestlist!" or "What celebrities are going to show up?" The Spin Crowd isn't like that there is none of that fake jeopardy, it's not like that. Obviously things always end up working out and of course we are going to deliver, this is my job! It's all the stuff in between and the comedy that makes it work.

The Spin Crowd Episodes
Episode 1: Image Is Everything
Jonathan & Simon team up with Mario Lopez to create a photo op for a new men's self tanner. Jonathan tries a questionable new method to get in shape quickly & Erika must decide whether she should take Jonathan's advice and get her lips plumped.

Episode 2: Give and Take
Jonathan is asked by Kelly Osbourne to put together a hot event for the charity she's involved with. Jonathan and Simon living together is causing them to fight more than ever and Lauren realises she went too far when she plays a trick on co-worker Summer, causing her to have a panic attack.

Episode 3: Beauty and the Billionaire
Simon goes against Jonathan's philosophy to never take on a job for just the money, and works with a billionaire client to make his girlfriend famous. Jonathan's patience is pushed to the limit when he is forced to work with publicist twins Suzy & Nikki. Appearances by Sophie Monk, Travis McCoy, Pete Wentz, & Stacey Keebler.

Episode 4: Should I Stay or Should I Go?
Jonathan and Simon are hired to throw a ribbon cutting event at a trendy new boutique with the notoriously difficult Shannon Doherty in attendance. Simon starts to prefer partying to press releases and after a heated argument with Jonathan, he moves out with no place to go. Erika must decide between an anniversary getaway with her boyfriend and her job.

Episode 5: PR and the City
Jonathan gets asked by best friend Kim Kardashian to put on an event in Times Square for a charity that she is passionate about, the Dian Fossey Gorilla Fund. Jonathan goes behind Simon's back and uses their staff to throw a house-warming party for his new NYC apartment.

Episode 6: Summer Lovin'
Jonathan takes his employees on a surprise getaway to the Hamptons where they get embroiled in a prank war. Summer searches for a vacation fling and Jonathan invites Kelly Rowland to visit and she joins in on the pranks.