A German fighter plane is shot down over rural Yorkshire; the pilot has vanished.

In an old farmhouse on the outskirts of Leeds, war-widow Jessica is raising her children and running a small dairy. When she encounters the Luftwaffe pilot hiding in her barn, she realises the young captain is dangerously ill. Despite the consequences, Jessica commits to nursing him back to health.

At first, prejudice and ignorance separate Jessica and Anton, but slowly these barriers are dismantled. From an unlikely friendship emerges a story of forbidden love that defies war and bigotry.

A British government investigator is sent to hunt and capture the fugitive German. Harbouring the enemy is among the greatest of crimes, and when suspicion falls on Jessica, a series of terrifying events are triggered, threatening her freedom and the security of her children.

In this world at war, there are no winners. It is a time of fear and uncertainty, where danger lurks behind every door and sometimes the greatest threats come from those you trust.

Question: What originally inspired the idea of Stormbird?

Karen Turner : Originally I wanted to write Stormbird because I liked the idea of following the house and characters from my previous books Torn and Inviolate into a story set much later. In a way I wanted to fast forward the reader to a more relatable time to see what had happened to the house and its residents over the years. I chose WWII as the setting because it was a very profound time for England and its people and the theme would resonate with people who, like me, had family members impacted. As I wrote, however, the story of Jessica and Anton took on a much greater importance and as they grew in personality, the story evolved into much more than I had envisioned so I decided to write it so it could be read independently or as the 3rd book in my series.


Question: Who do you hope reads Stormbird?

Karen Turner : Naturally I hope everyone reads Stormbird !
Seriously, I think people who have read my previous two books would love the 'tying-up' of the loose ends from there so I really hope they read it and enjoy the outcomes they discover. I also hope that people who have never read any of my books read it because I enjoyed writing this book so very much that I would love people to enjoy reading it just as much!

Karen Turner : So much of Stormbird was drawn from my mum and my grandma's memories. Mum was born in Leeds, Yorkshire in 1941 and would tell me stories of how she grew up never knowing her father (he was killed before she was born).
Mum described playing in the rubble of peoples' homes. My grandma Olive drove an ambulance around Leeds helping rescue teams search for people injured – or worse – in the bombings.
In Stormbird, my descriptions of houses, streets, and the way people lived in those harrowing times are real. The fear and deprivation are real.

Karen Turner : It wasn't difficult, but there were quite a number of times where I had to pause and really think about what it must have been like for my mum and grandma.
Over the years, their stories became the stuff of family anecdotes with little acknowledgements like, "Oh yeah my mum was born during the war." Or "My mum didn't know what toothpaste was until she came to Australia. They used soot from the chimney and mum had perfect, white teeth." These stories were just stories and I'd always felt a little removed from them.
During further research and the writing of Stormbird, these anecdotes crystallised from little family tales – not quite tangible because they happened so far away so long ago - to a hard reality. It gave me an entirely new respect for those two women – both gone now. I'd love to be able to tell them how affected I was by what they must have gone through and how proud I am of them. 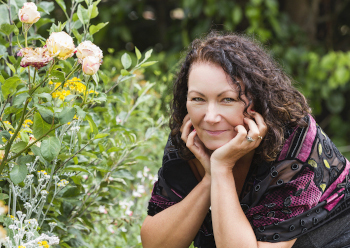 Question: Is their a main message you hope readers take from the book?

Karen Turner : Yes, definitely. To the day my grandma passed away, she wouldn't hear a nice word about German people. Her husband was killed and she was left pregnant and destitute. She lost family and friends.
But in the writing of Stormbird I really wanted to show that the German soldiers were simply obeying the orders of their leaders, just like ours were. They were conscripted, separated from loved ones and forced to perform terrible acts against their fellow humans. They were frightened, lonely, homesick. War isn't decided by the soldiers, it's decided by governments and leaders. I believe that empathy for one's enemy is a theme that is as relevant today as it has ever been.
I think that if my grandma was alive today she would refuse to read Stormbird because she never got over her pain and grief. However, I think my mum would find some connection with my characters – after all Mum married an Italian!


Question: What research did you do, prior to writing Stormbird?

Karen Turner : I knew my family's anecdotes and history, of course, but I wanted to know how people lived and worked during this time. How the people tried to conduct a 'normal' life despite the constant fear and threat. Fortunately, there's a lot of information online about WWII and I was able to see newspaper articles, photos and films. My library also had some wonderful reference books and I bought a couple of good books as well.
I read a lot of fiction and non-fiction set during the period to 'put myself' in the picture so I could describe to my readers what I was seeing.

Karen Turner : Just start writing. Sounds simple but it's true. It's knowing when to stop - that's the hard part.
I have a friend who is an artist. She says a canvas is never finished – you'll always find something to 'touch up' so you need to just draw a line under it and call it done. Abandon it. Writing a book is the same. There's always some detail you can change, a word, a sentence, etc. S