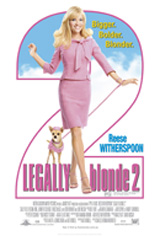 Synopsis:
Reese Witherspoon is back as Elle Woods in Legally Blonde 2: Red, White and Blonde. Now Elle is juggling a demanding career as a rising young lawyer as well as preparations for her wedding to the man of her dreams. But when she stands up for the rights of the other guy in her life, - Bruiser, her Chihuahua - Elle is fired from her job. She's devastated, but you can't keep an optimist down. Ms Woods goes to Washington to take matters into her own well-manicured hands. Trying to learn the political ropes and win over self-serving politicians, Elle faces a formidable challenge. But with her clever and sassy signature blend of determination and intelligence, she bucks the system the Elle Woods way, inspiring those around her to find a voice of their own.


My Verdict:
If you enjoyed the first Legally Blonde movie, you will enjoy this sequel because it is just more of the same. Reese Witherspoon has the role of Elle Woods down pat, playing her as sometimes naïve yet with a degree of savvy which belies this. She certainly looks like she was having fun as she is always so bright, perky and positive.
Using her pet Chihuahua, Bruiser, as the main subject matter allows for some more fun and just enough seriousness not to fall too far into comedic oblivion. Some may find Elle Woods too much to bear forgetting that this was not a role that was meant to be taken too seriously. Reese Witherspoon dominates the camera time and has so many costume and hairstyle changes that it was hard to keep up.

The big issue here is learning to speak up and not be afraid of your opinion, and at times, it is hard to accept that Elle really can win over all the politicians, but Reese manages to maintain that trademark that was so successful in the first Legally Blonde movie. Her impending marriage to Emmett Richmond (Luke Wilson) takes a back seat and Paulette (Jennifer Coolidge) seems like she is just along for the ride and a few token jokes. Bob Newhart plays Sid, a doorman of the hotel where Elle is staying in Washington. His role is curious in that he seems so knowledgeable about the political system in Washington - all that from just being a doorman??

Legally Blonde 2 is an average sequel that hasn't broken any new ground but at least it is still out there rooting for all blondes and it's fun while it's doing it.