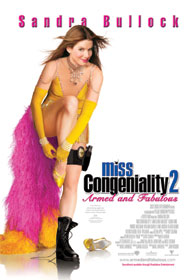 Synopsis:
'Miss Congeniality 2: Armed and Fabulous' up with FBI agent Gracie Hart (Sandra Bullock) shortly after she successfully disarmed a threat against the Miss United States Pageant while working undercover as a contestant in 'Miss Congeniality' (2000) and became an overnight media sensation.

Things haven't been going so well for her lately. Reeling from a broken romance and frustrated to find her newfound fame is jeopardizing the undercover work she loves, Gracie now reluctantly agrees to serve the Bureau in the only way possible: coifed and styled for the talk show circuit as "the face of the FBI." Though resistant at first, she soon warms to the attention and it's not long before she's getting into her new role a little too much. Her new partner Sam Fuller (Regina King), a tough, ambitious agent who is clearly not her biggest fan, is the first to point out that the pampered Bureau star is turning into FBI Barbie. But when Gracie's best friend, pageant winner Cheryl Frazier (Heather Burns), and emcee Stan Fields (William Shatner), are kidnapped in Las Vegas, Gracie's crime-fighting instincts kick back in.

Not wanting to risk losing their greatest PR asset, the FBI top brass forbid her to get involved and charge Sam with keeping her in line. But when it comes to breaking a difficult case and helping her friends, there's nothing Gracie won't do.

My Verdict:
'Miss Congeniality 2: Armed and Fabulous' is a light, fluffy comedy with Sandra Bullock reprising her role of FBI Agent Gracie Hart. Gracie went undercover to become a contestant in the Miss United States pageant because of a terrorist threat to the pageant and this sequel picks up three weeks later, as Gracie has reached celebrity status and where she is recognised everywhere she goes, even to the point of threatening to endanger lives when she tries to foil the "housewife thieves" during an undercover assignment. Realising that Gracie's celebrity status may be to its advantage, Gracie is sent off on the talk-show circuit to enhance and promote the work of the FBI. This is ok for Gracie except that she is given a stubborn, loathsome and obstinate partner, Sam Fuller (Regina King) who is to protect her. This is a case of hate at first sight and there are no prizes for guessing if they will be friends by the conclusion of the movie.

Meanwhile, the reigning Miss United States Cheryl Frazier (Heather Burns), and emcee Stan Fields (William Shatner), are kidnapped in Las Vegas and it's up to Gracie to solve this crime, bringing along a small entourage with her. Using Las Vegas gives plenty of room for showy costumes and big sets, including the final outdoor pirate ship battle. Also squeezed into the Las Vegas trip is a sub-plot involving Dolly Parton, but we only ever get to hear Dolly speak while she is on her back on the floor - pity.

'Miss Congeniality 2: Armed and Fabulous' is very light on as far as depth of storyline goes, as this is certainly more of a chance just to show Bullock as Gracie given the success of the first instalment. Bullock is never stretched, as none of the cast is, and all seem very casual coasting along without giving too much effort. Some scenes are added purely for laughs - Gracie going incognito to visit Stan Fields' mother in a nursing home is obviously one, but at least there are a few token lines to raise a laugh.

This is a case of a sequel where a little bit more information about the original would have made this outing make a little more sense - it is almost assumed that everyone knows that FBI Agent Gracie Hart was in the Miss United States pageant and had formed a close relationship with the eventual winner, but some might not have seen the original and be sitting there thinking what the heck is going on given that there are no flashbacks. There are also numerous references to a relationship Gracie had with a male counterpart, but even if you did see the original, your memory might not stretch to the finer details given that this sequel has taken five years to appear. Still, there is enough here to keep you amused, at least until all the outtakes shown during the credits have finished, but one can only hope that this is the last we need to see of Gracie Hart.