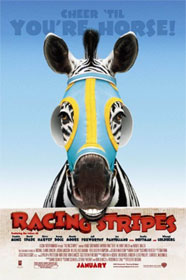 His Stripes Made Him An Outcast. His Heart Made Him A Hero.

Synopsis:
In the middle of a raging thunderstorm, a travelling circus accidentally leaves behind some very precious cargo - a baby zebra (voiced by FRANKIE MUNIZ). The gangly little foal is rescued by horse farmer Nolan Walsh (BRUCE GREENWOOD), who takes him home to his young daughter Channing (HAYDEN PANETTIERE). The little zebra, or "Stripes," as Channing calls him, is soon introduced to the farm's misfit troupe of barnyard residents, led by a cranky Shetland Pony named Tucker (voiced by DUSTIN HOFFMAN) and Franny (voiced by WHOOPI GOLDBERG), a wise old goat who keeps the family in line. The group is joined by Goose (voiced by JOE PANTOLIANO), a deranged big-city pelican who's hiding out in the sticks until the heat dies down in Jersey. The un-aptly named bloodhound Lightening (SNOOP DOGG) keeps a lazy eye on goings-on at the farm - in between naps.

The Walsh farm borders the Turfway Racetrack, where highly skilled thoroughbreds compete for horse racing's top honour, the ultra-prestigious Kentucky Crown. The Turfway Racetrack is run by the ruthless queen of the Kentucky racing circuit, the incredibly wealthy and exceptionally cold-hearted Clara Dalrymple (WENDIE MALICK). Stripes constantly battles the ridicule of the Estate's thoroughbreds-in-training, led by spoiled bully Sir Trenton's Pride (voiced by JOSHUA JACKSON), who taunts him relentlessly about his lack of breeding and unusual appearance. But the Estate is home to some kinder residents, particularly Sandy (voiced by MANDY MOORE), a beautiful mare whose admiration and affection for Stripes further enrages his rival.

Stripes makes some friends down at the track as well, most notably the manic horsefly duo Buzz (STEVE HARVEY) and Scuzz (DAVID SPADE), whose love of song and dance is eclipsed only by their love of hot dogs and horse poop. As he thrusts himself into a world of elite athletes, intense competition and enormous stakes, Stripes must prove he's fast enough and tough enough to run with the big horses if he wants to land in the winner's circle at the legendary Kentucky Crown.Some champions are born, not bred!

My Verdict:
'Racing Stripes' is a holiday family movie comedy that is based on the fish out of water scenario. Stripes is a zebra who is accidentally abandoned by a circus and picked up by a widower farmer who takes him home and his persuaded by his teenage daughter, Channing, to keep him, along with their menagerie of farmyard animals. These animals can all talk, but only they can hear and understand each other, this being achieved using CGI which in the main, comes off ok. What is different about this farm is that it is such a mixture of misfits, which leads to so many different personalities and so many choice lines given the actors taking on the voices of these animals. In this case, perhaps there are too many different personalities that this farm may well have needed an animal psychiatrist, if the humans could only hear their conversations.

Stripes wants to becomes a racehorse, not realising he is a zebra, which in reality could never happen as the top speed of a zebra could never match that of a racehorse, but that is the beauty of movies where reality can sometimes be stretched and where the impossible is achievable. At least in this case, Stripes really was a zebra (one of many used during filming), not a donkey with stripes painted on or a modified CGI horse, which helps his cause so much. The other animals in 'Racing Stripes' are mostly like their human counterparts, with every type accounted for using real animals except for the two horseflies who were completely computer generated who provide the comic relief which was annoying at times, but welcome at others.

The storyline is very predictable after the initial set-up, with the finale being the 'Kentucky Crown' horserace that Stripes is entered into with Channing as jockey. Channings mother was killed during a horserace, which is why her father is so reluctant to see history repeat but his fears are allayed as the race progresses.

Amidst some harsh criticism, I sat in a cinema full of families who all appeared to be thoroughly enjoying 'Racing Stripes'. The movie had many redeeming qualities and some moments that were truly heartfelt and some that were genuinely funny. Perhaps some of the criticism has come from people who have forgotten what it's like to be a child or who haven't sat in a cinema full of families enjoying themselves which after all, is what movies like these are really made for. 'Racing Stripes' is a family movie that was sometimes slow to get out of the gates, but was a fun race to watch and kept you wanting to see who was going to be first past the winners post.