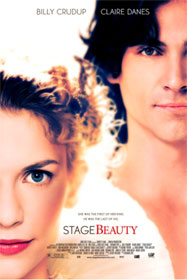 She Was The First Of Her Kind. He Was The Last Of His.

Synopsis:
It's the 1660's, and Edward 'Ned' Kynaston is England's' most celebrated leading lady. Women are forbidden to appear on stage and Ned profits, using his beauty and skill to make the great female roles his own. But King Charles II is tired of seeing the same old performers in the same old tragedies. Since no one will take him up on his suggestion to improve Othello with a couple of good jokes, he decides to liven the Royal palate by allowing real women to tread the boards. In a slightly less progressive spirit, he rules that men may longer play women's parts. This is good news for the monarch's mistress, the saucy stage-struck Nell Gwyn. It is also good news for Maria, Kynaston's lovelorn young dresser who has been secretly performing at a seedy tavern in lavish costumes borrowed from her employer. It is very bad news for Ned, who plummets from his exalted position as one of London's most desirable females to become a virtual nobody, virtually overnight. Cast out of the spotlight, Ned seems headed for burlesque obscurity until Maria, now a rising star, takes it upon herself to make a man of him again.

My Verdict:
'Stage Beauty' is movie that is also a history lesson set when only men could portray women on the stage during Shakespearean times. Ned Kynaston (Billy Crudup at his beautiful best) is the ultimate "woman" and knows it, only allowing a select few to even touch him. One of these is his dresser Maria (Claire Danes) who has been studying Kynaston's style from the wings of the theatre in the vain hope that she will one day be able to become a serious thespian, even borrowing Kynaston's costumes to use at a nearby "theatre" to practise in front of an unknowing audience.

Rupert Everett cleverly plays the eccentric King Charles II who loves to watch theatre but tires of tragedies being, well, tragic. He wants to change theatre, as it is known by changing and adding lines in plays and by also allowing women to play women on stage, a rather radical approach that is met with scepticism by many. This now means that Kynaston has lost his crown as a woman, which sends him into the depths of despair as he tries to reconcile his life and what it now means, which leaves the door open for Maria to try to save the man she has come to admire and revere.

The costumes are generally lavish, the sets pretty much standard for this era and there is a wonderful support cast including Richard Griffiths as Sir Charles Sedley who steals his scenes, has some of the best lines and also a fabulous wig, but it is the performances of Claire Danes and Billy Crudup that really make 'Stage Beauty'. They obviously have some chemistry that translates to their performances which provides sustenance to the theatrical politics of the era. It is the final act that ultimately makes you draw breath and watch these two actors play against each other in a scene that is very unexpected and unanticipated.