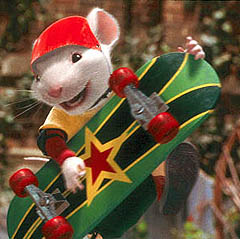 This time, Stuart must journey through the city with a reluctant Snowbell (voiced by Nathan Lane) to rescue a new friend, Margalo (voiced by Melanie Griffith), from a villainous Falcon (voiced by James Woods).