Terminator 3 : Rise Of The Machines 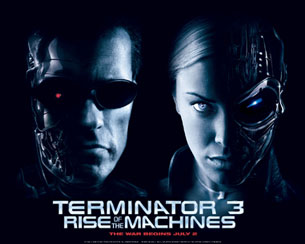 
The Machines Will Rise


My Verdict:
What an amazing movie! Terminator 3 delivers action, action, action and then when you think there couldn't be anymore there is. The special effects almost steal the show from Arnold Schwarzenegger who has some brilliant one-liners in his heavily accented voice. This time his role as a Terminator is to protect John Connor (Nick Stahl) but he has almost a human emotional side not seen in the two previous Terminator movies. Arnold is still looking good and still more than capable of keeping us entertained, even naked!

Newcomer, Kristanna Loken took mime classes to prepare for her role as the Terminatrix as it is a role with little dialogue. Her character relies on facial expression and body movement to convey her message and Kristanna certainly conveys the message. Claire Danes plays Kate Brewster who has a previous connection to John Connor and an even deeper connection to the plot via her father. She becomes a reluctant ally to John but slowly begins to accept that she does have a role to play in the future of the world.

To say that Terminator 3 : Rise Of The Machines is brilliant is an understatement. The special effects, combined with live robotics and make-up and surpass anything previously seen. The action sequences are long and remarkable in their believability. And there is even a plot that has some sense which is sometimes lacking in action movies. This plot also makes references to the two previous Terminator movies so be assured you don't have to have seen them to understand this one.

Terminator 3 will have your heart racing and may even beckon you back to the cinema for a second look. Well worth catching.