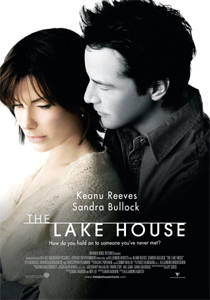 Synopsis:
Alex moves into a house designed years ago by his famous architect father. He begins a correspondence with the former tenant, Kate, when she leaves a note for him about forwarding her mail. Only, as it turns out, she's not the former tenant - Alex is. Somehow Kate is living her life two years in the future. She's in 2006 while he's in 2004 but they're able to write to each other. It doesn't take them long to get used to this bizarre situation but is it all just a cosmic joke?

My verdict:
Screenwriters clearly enjoy going to great lengths for new twist in the "girl meets boy" stakes. There's been sexual confusion ('Kissing Jessica Stein', 'Imagine Me and You'), falling in love with someone who's in a coma ('While You Were Sleeping'), unrequited love ('My Best Friend's Wedding', 'The Object of My Affection'), and even looking for love in alternate realities ('Sliding Doors', 'Somewhere in Time') - the very definition of "all the wrong places". 'Sleepless in Seattle' went one step too far, expecting audiences to sit through almost the whole film while the couple avoided contact. 'The Lake House' employs a little of this kind of daft spiritualism but manages to throw in some conversation and a few ideas as well.

Adapted from a Korean film, 'The Lake House' is cleverly written, albeit full of moments that require you to not merely suspend your disbelief but rip it out and slap it around a few times. Still, while a long way from gritty realism, this film has a certain refreshing sincerity. It's not just perfect people whining about their perfect lives. Kate (Sandra Bullock) has no wonderfully sassy best friend to confide in every five minutes. Alex (Keanu Reeves) brushes off Mona (Lynn Collins), a woman who's interested in him, as through he hardly notices her. He's more like a Buddhist monk on a quest for enlightenment than the cocky man-child typical of such films. Ultimately, 'The Lake House' is sustained by the likeability of the two leads. Even when they're not doing much they're quite entertaining about it. She's a doctor, he's an architect - okay, so not startling in originality but at least she doesn't work for a fashion magazine and he doesn't build wooden boats while wearing ridiculous jumpers (well, only once or twice - what is it about rom coms and outlandish knitwear?).

This is also a film with a richer sense of aesthetics than is typical of mainstream fare. The architectural theme allows for some enjoyable shots of Chicago buildings - and another interesting performance from Christopher Plummer in a small role as Alex's emotionally distant father. For Alex, the glass box that is the lake house is a symbol of his past, of the love his parents shared but could not sustain. But as the story progresses it becomes, for both Alex and Kate, a reminder of what their lives should be and are not - the embodiment of their aspirations. You're either going to go with this film or you're not. This is earnestly romantic stuff and if you can't hack it you'd better be warned right now.