She may have her origins in the world of computer games but with the archaeology brains of Indiana Jones and the techno-gadgetry of James Bond, Lara Croft is a heroine who was made for the big screen.

In her second cinematic adventure, Lara (Angelina Jolie) is unravelling the mythology surrounding the mysterious Pandora's Box, which was apparently created at a location known as the Cradle of Life. Lara's research leads to an underwater temple and the discovery of a golden sphere containing the box.

Dark forces are monitoring Lara's activities, however, and the box is soon stolen and placed in the control of a criminal with apocalyptic plans. Aware of the evil the box could release, Lara is determined to recover it, even if she has to recruit help.

Directed by Jan de Bont, (Speed, Twister) Lara Croft Tomb Raider: Cradle Of Life has been acclaimed for its spectacular stunt sequences. Filmed at stunning locations in Greece, remote China and Africa, this is a movie for all action fans. 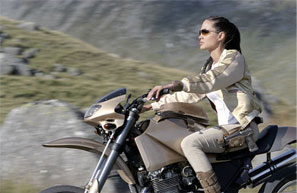 Review:
She's back with avengence, Lara Croft (Angelina Jolie) thrills us with her 'to die for' wardrobe & action packed stunts. She's cool, calm, collected and better yet she can really kick some butt. The cradle of life shows us Lara Croft's coming of age, look out James Bond, Lara's got your number.